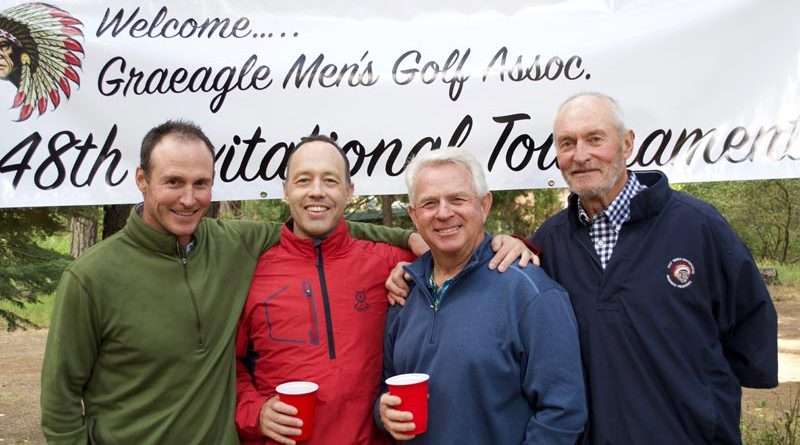 The Graeagle Men’s Golf Association completed its 48th annual member/guest Invitational Tournament over the weekend of Aug. 9 and 10.

Exceeding early expectations, Invitational Chairman Jeff Monaghan was all smiles when 96 players signed up for the two-day event. Reliving the 1971 original date of the first Invitational, the tournament was promoted with a ’70s theme, “Groovin’ in the Meadows.”

Tie-dye shirts were a popular costume as music from that era was played in and around the clubhouse. Meanwhile, a 1965 Ford Mustang was on display to help set the mood. The weekend was capped off with a steak dinner prepared by the club’s grill team of John Grasso and Food Chair Jay Hendrick. The chefs cooked up food for 150 members and guests served at the Graeagle Picnic Grounds. A few light showers didn’t seem to dampen the spirits of those in attendance enjoying the live music.

On the golf course the competitive format was three flights of four-person teams scoring their two best balls for the team. Cumulative scores were added for both days awarding the top low net finishers in each flight and one top low gross from flight 1.

A “Horse Race” was played the afternoon of the first day of the tournament. Each 4-man team competed in one of three flights with three holes played to pare down to a single winning team from their flight. Those three teams then played a sudden death hole to determine an overall winner. Taking first place was the team of Jim Reynolds, Don Ratto, Jim Kinkaid and Steve Brosnan.

“Months of planning are required to put on an event such as this,” said GMGA Vice President and Invitational Captain Jeff Monaghan, who thanked the committee and those who helped make the event “one of the best ever” at the Saturday night banquet. Plans are already afoot for the 49th annual next year, as well as early prep for the big one in 2021, the 50th annual.

Right on the heels of the Invitational, 26 players showed up to play Aug. 14. The game was 4-man two best balls along with skins. Taking first place with a score of 119 was the team of Jim Reynolds, Chuck Weidner, Bert Bellows and Tom Wilson. In second place, at 123 points, were Bob Davies, Mike Gibson, Norm Miller and Dan Anderson. Third place, with 125 points, went to Jack Gilbert, Bob Laxague, Jim Oster and Bill Hopp.

Only four skins were awarded, one each to Mike Gibson, Bryan Hansen, Tom Wilson and Dan Anderson. The Par 3 Closest to the Hole competition continues with Mike Gibson now heading the list of ten best with his one foot eleven inches from Wednesday’s play.

Information about the Graeagle Men’s Club can be found by visiting gmeadowsclubs.com/MenHomeDir/index.html.

Aug. 14 brought lots of golfers out to play during Wednesday morning scrambles. Close scores made the day of play exciting for everyone however there was one golfer more excited than all the rest. Donny Hubbell had a spectacular shot on hole 8 with a hole in one. His teammates attested the fact that it was a great one! “Donny is also our club tournament director and does a wonderful job of putting together events,” said Margie Joseph.

The winning team for the day with a score of -9 was Donny Hubbell, Darel Joseph, and Jeff Stevens.
Second place was Matt Taborski, Ron Williams and Leo Sorosinski. Taking 3rd place honors were Robert Turcotte, Don McConnell, and Mike Ingle. Going on down to 4th place was the team of Ron Carter, Dick Grace and Margie Joseph  “There were two other teams that rounded out the competition nicely,” said Margie Joseph. “A few new faces today, we hope they continue to come and participate.”

Other news for the club is on Aug. 24 the course will become a par-3 design. All holes will be just that, all par 3s. So this is an exciting day to bring out all levels of players.

All are invited to participate in the fun during Wednesday morning scrambles. Interested folks may call the course to get signed up for a day of fun and prizes, 284-6300.

On Aug. 13, the game for Ladies Day at Plumas Pines was Buddy Day: 1 of 2 Net Best Ball. Play was from the Forward Tees.

The results were: 1st Place – Jackie Luckey and Jan Enloe with a net 60; 2nd Place – Bev Parry and Jan Anderson with a net 63.

There was one chip-in today by Jan Anderson. Closest to Pin winners on Hole 11 were: