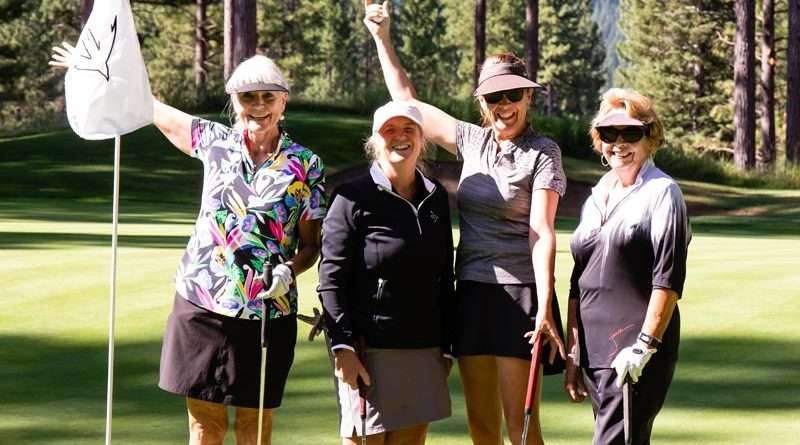 The Bailey Creek Women’s Club has had a busy August and is happy to welcome several new members. In a game of “Blind Nine,” on Aug. 14, taking home the winnings in  Flight 1 were Donna White, 1st and Terri Chuchel, 2nd. In the second flight Jenni Cesarin placed first and Diana Pallari placed second. Diana also celebrated a chip-in on hole 1.

On Aug. 21, with perfect temperatures, the ladies played a game of “Eeny, Meeny, Miny, Moe.” After picking their three best par 3, 4 and 5 in Flight 1, Barbara Pechio came in first, and Ginger Birchfield second, in a card off. In Flight 2, Diana Pallari took 1st and Mo Clark 2nd. Mo also had a chip-in on the 17th hole.

The BCWC welcomes guests and new members. For information contact Jenni Cesarin at 249-5346.

On Aug. 16, the Badditos fired off from the combo tees with 17 members playing for low net and skins. There was a tie for first place with a low net of 65 shared between Norm Miller and Jim Oster.  Coming in second at 68 was Grant Mayfield. It was decided that with the two-person tie for first, a fourth score should be awarded, that going to Bob McIlroy with a net 69. A walloping seven skins were paid, two of them to Norm Miller and one each to Grant Mayfield, Jay Hendrick, John Scott, Andy Knudsen, and Cal Linde.

Meanwhile, over on the Bandits side, there were eight members playing from the white tees. Their game was “in the box” counting best ball on Par 4s, both balls Par 3s and “in the box” on Par 5s. Taking first with a score of 82 was the team of Chuck Hein and Bob Laxague.  Close behind with an 84 were Dan Friedman with Dave Dierking.

Just when things begin to settle down following the Invitational tournament, we pick it up again with the Guys and Gals Couple’s Championship played Aug. 21 and 25.  Due to scheduling complications, the first of the two-day event was split between Wednesday and Thursday, then everyone gathering together on Sunday, Aug. 25, for the final round. The results of the couple’s championship will be published in an upcoming report.

Information about the Graeagle Men’s Club can be found by visiting gmeadowsclubs.com/MenHomeDir/index.html.

On Aug. 22, GMWGC members played a simple game of “low net.” The over-the-field winners were: First Low Net, Cathy Churchill, with a net 73; Second Low Net, Patty Monahan, with 74; and, Third Low Net, Renee Miller with 75.And, Renee Miller had the only “chip-in” of the day.

August has been a busy month for the members of the Lake Almanor Country Club Women’s 18-Hole Golf Club.  Besides the regular Tuesday play, a two-day Club Championship tournament took place Aug. 13 and 16. We are pleased to announce our 2019 Club Champion is Trudy Leete. Well done, Trudy! Our 2019 Low Net Champion is one of our newer members, Robin Greer. Congratulations to both of you!

On Aug. 20, we held our season finale, Captain and Crew. It was a fun-filled day, which included the installation of new officers, championship announcements, the roasting of members, entertainment, good food, and a little goofiness with some golf thrown in.

Our tournament chairs, Muffy Bui and Linda Rawson, along with “Best Event Decorator” Amanda Hosman, showed us a great time. The theme was “Beach Buddies.” It was a perfectly well-planned day from the ‘”shared drive golf tournament to the Beach Boys music and margaritas!

Many thanks go out to Muffy and Linda for chairing this event. Amanda, margarita serving husbands, and all the other volunteers, thank you for making our day!

LACC Women’s Golf Club Tuesday morning 18-hole and Thursday morning 9-hole leagues are open to women outside the community.  If you are interested in playing please call our membership chairperson, Jessie King, 259-2896.

It looked like a PGA tournament today at Mt. Huff Golf Course. We had some tight scores, and birdies and eagles. The team of Mary Trafton, Larry Craggs, Leo Ray and Bill McRoberts came in on top with -11. A close 2nd was the team of Donny Hubbell, Ron Williams, Don McConnell and Jeff Stevens just 1 behind at -10. At

9 under, the team of Tom Christensen, Leo Sorosinski, Mike Ingle and Margie Joseph came in 3rd, and at 8 under, the 4th place team was Jim Battagin, Darel Joseph and Henry Martin. Fifth place was Ted Trafton, Robert Turcotte, Stan Carr, and Bill Arave.

The only chip in was by Mary Trafton, and closest to the pin was Don McConnell.

Remember that scrambles are open to the public and a great way to get to know a great group of people. All are invited to participate in the fun during Morning Scrambles on Wednesdays. Interested folks may call the course to get signed up for a day of fun and prizes, 284-6300.

Whitehawk Ranch Ladies Golf 2019 Invitational‚ Paniolo Daze‚ was held with a Filly Race and Invitational Round on Aug. 12 and 13. Everyone enjoyed the Hawaiian Cowboy-themed event that Co-Captain Susan Erne and her talented committee produced.

The Filly Race winners for the Maui Flight: Brenda Knott and Robbin Sanchez, The Oahu Flight: Susan Erne and Chris Herauf. The Kauai flight: Susie Davis and Kathleen Graham. Dinner followed on the deck prepared by Marcie and WHR staff.

A money pot raffle was held with the biggest winner of the day going to The Esperanza Foundation, which locally awards scholarships to Portola High School graduates for continued education.  Everyone is looking forward to Paniolo Daze 2 next year.