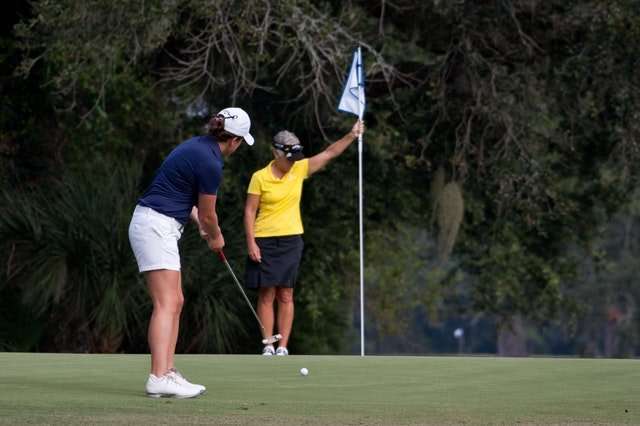 The Plumas Pines Golf Resort held the 12th Annual Couples Championship on July 16. This year’s format was one best ball of partners, with each player contributing a minimum of six holes.

In the Mohawk Flight, John and Scooter Kidwell were the low gross champions shooting a 77. The low net winners, after a scorecard playoff, were Jerry Burt and Mary Stonebraker, posting a 60. Larry and Renee Walker took second low net, also shooting 60.

Closest to the hole winners were Woody Barry at 10 feet 7 inches and for the ladies, Jan Anderson at 16 feet.

Brandon Bowling, Director of Golf/General Manager, presented all the awards after a fabulous dinner at Longboards.

It was a hot time on the old links on July 12, for the Wednesday Morning Scramble. Our teams were competitive and the scores were close.

Tie for second place at 2-under-par gave the honors to the team of Matt Taborski, Mike Ingle, and Jeff Stevens as well as the team of Tom Gossett, Dan Rooney and Bill McRoberts.

Mike Ingle hit it closest to the pin. There was no chip-in winner.

Are you just loving this weather? The golfers at Mt. Huff sure are.

A well-attended Wednesday Morning Scramble on July 19 brought some great scores to our teams.

The chip-in was a three way between Mike Ingle, Leo Sorosiski and Tim Battagin.

Jeff Stevens hit it closest to the pin.

On July 12 the game of the day was “3-Person, 2-Net Best Ball.” What a fun game that was, with everyone enjoying the day, even if they weren’t the winners. Those lucky enough, talented enough, to win were as follows: Team 1, all three players taking first place, as this was a team effort, Joan Dickerson, Joyce Gronroos and Jenni Cesarin. Chip-ins were made by Joan Dickerson on Hole 14, and Ginger Birchfield on hole Hole 17 who shared a “pot.” Finishing the day was a birdie by Mary Craig on Hole 12.

Wednesday, July 19, was another beautiful day at Bailey Creek. Our game of the day was “Maid’s Quarters” and played the day following the LACC’s tournament. A few of us were eager, but a bit worn out from the previous play. That didn’t stop our winners from taking home the money. First place went to Ginger Birchfield, second place went to Joan Dickerson and third place was awarded to Donna White.

It was quite an exciting day and we are looking forward to next Wednesday. Hope to see you then.

Lake Almanor Country Club Women’s Golf Club held their annual Sugar Pine Golf Tournament on Tuesday, July 18. Fifty-six members and guests joined the fun playing in the “My Favorite Color is Wine” themed event. Tournament chairperson, Collette Prentke, and her many volunteer helpers did an outstanding job for us. The clubhouse and tee box decorations were perfect and included everything wine (even casks) and along with the usual water and sodas, they provided sangria, cheese and crackers at the turn.

Each participant received a tee prize of a uniquely charming and very useful golf purse with an LACC logo golf ball and tees inside. Member Jan Stillwell must have spent every minute of her spare time this winter making all of them for us. Thank you, Jan.

When we finished our game we enjoyed a luncheon at Clifford’s followed by the announcement of raffle prizewinners and tournament winners. There were too many raffle prizes to name them all, but they included an assortment of creative gift baskets and golf outings at several golf clubs.

Thank you to those who contributed and to those who solicited prizes. The main raffle prize included two nights at the Best Western Hilltop Inn, two $50 gift certificates to C.R. Gibbs American Grille and four rounds of golf at Riverview Golf & Country Club (package coordinated by Steve Gaines). The lucky winner of the prize was Nancy Dooly. Congratulations to you, Nancy.

The game format was four-lady teams using the two best net ball scores per team. The winners of the 2017 Sugar Pine Tournament were:

Additional prizes were awarded for longest drive, most accurate drive, and closest to the pin. The winners were: Longest Drive — Mary Town; Most Accurate Drive — Kathleen Mitchell; and Closest To the Pin — Sandy Mitchell.

Congratulations to all of you well deserved winners. A special thank you to Collette and her support team of wonderful volunteers for their creative ideas and hard work. It was a great tournament enjoyed by all of us.

LACC Women’s Golf Club is open to women outside our community. We welcome new members and invite you to come join the fun. Please call our membership chairperson, Jessie King at 259-2896.

We also had sweeps for Tuesday, with the following winners of low gross and low net:

Three gals had chip-ins that day: Scooter Kidwell had two; Annie Meyer also had two; and Cindy Donohue had one chip-in.

On Thursday, July 20, the game of the day was “Orange Ball.” The netOrange Ball of the four-person teamcounted on each hole (each player was the orange ball every fourth hole), plus the low net of the other teams’ best netball. The winners were: Team 1: Carol Desmond, Debbie Fuetsch, Giuliana Glazer and Diane Trainor, team net two balls 129; Team 2: Holly Anderson, Lorraine Cornish, Chris Laxague and Sue Taylor (130).

Jennifer Baker and Dee Walker each had one “chip-in.”

Friday, July 14, was the usual low net game with skins. John Scott and George Fraser tied for first place with a 68. Leo Reihsen and John Grasso tied for second with a 71. Skins were won by Norm Nichols, Chuck Pratt, Any Knudsen, Jay Hendrick and Jack Cornish.

The Wednesday July 19 Play Day was a two-man better ball format. In the combo tee division, the team of Reihsen and Franck shared first place with Flynn and Nichols with a score of 59. Skins in this division were won by Bob McIroy and Mike Gibson (2).

In the white tee division, the team of Adams and Barnes placed first with an impressive 57. The team of Anderson and Hansen took second with a nice round of 59.

The Annual Charity tournament is scheduled for Wednesday, July 26.