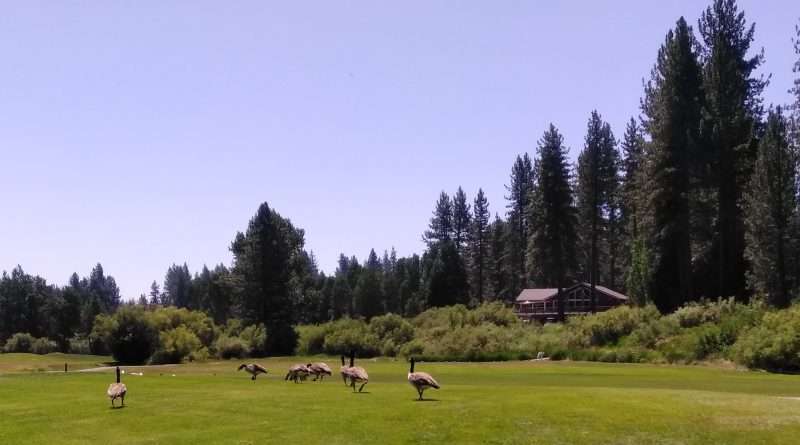 The second fairway at Graeagle Meadows has drawn a good crowd July 9. There was no comment from the geese, but then, no complaints either. Photo by William Hopp
Golf Results Sports
July 19, 2021 Editor
The week of golf for the Graeagle Men’s Golf Association started on Tuesday July 6, with a round 1 match between Mike Irving and Jim Foug. Jim won on the 17th hole 2 and 1 to move onto round 2.
Games on July 7 were a 4-man challenge called 1-2-3. On the first hole one ball is used, on the second hole, two balls, on the 3rd hole, three balls. The sequence continues for the remainder of the round. First place was taken by the team of Jim Adams, Wally Walker, Andy Knudsen and John Grasso with the combined score of 129. There were two teams tied for second place, coming in with the score of 142. These were the teams of Norm Nichols, Ron Eaton, Bob McIlroy plus Tom Fregulia and the team of Mike Gibson, Steve Peterson and Jack Gilbert, who competed with only three players. Skins that day went to John Grasso with a 3 on hole 1 and then another with a 1 on hole 3! Next came Jim Adams with a 3 on hole 6 and Mike Gibson with a 4 on hole 9. Tom Fregulia took hole 13 with a 3 and Norm Nichols took hole 17 with a 2.
Friday games July 9 were 2-man best ball with each partners’ ball being used 9 times. First place was a tie between the teams of Norm Miller & Bryan Hansen and Chuck Hein & Dennis Flynn, both shooting 62. Third place went to the team of Don Barnes & Dave Macdonald with a score of 63. Only two skins were taken this day with Bob Davies taking hole 1 with a 3 and Norm Miller taking hole 14 with a 2. There was also a round 2 match played on that Friday between Chuck Franck and John Jackson although the results of the match are not known at this time.
Inquiries about membership in the Graeagle Men’s Golf Association can be submitted to [email protected], or visit our website at gmeadowsclub.com/MenHomeDir/.
If you would like your golf club scores posted by Feather Publishing, send them to [email protected]