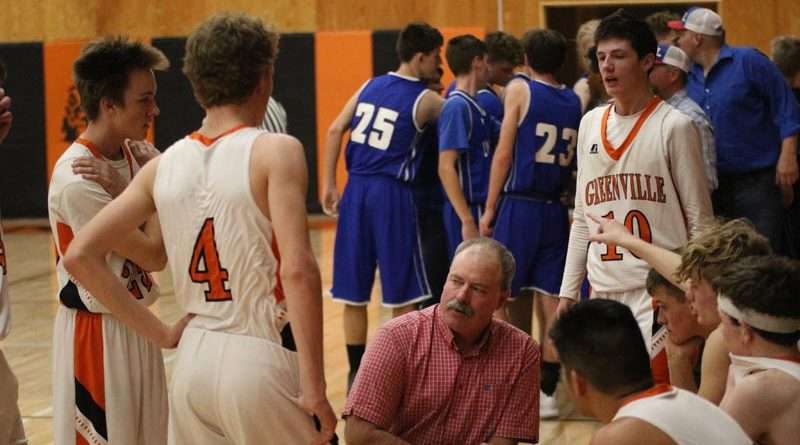 The final game before playoffs for the Greenville Indian boys was Feb. 13 in Princeton with a non-league game against the Eagles.

The match started off tight with a first quarter score of 22-20 in favor of the Vikings. The home team continued to lead through to the half 45-39.

The Indians came back after the break to score 16 points while they held the Vikings to half that and take the lead, 55-53.

The Indians maintained control of the court in the fourth quarter to outscore the Vikings again with 19 points added to just 12 from the Princeton home team.

The Greenville boys beat the Herlong Vikings in a very close battle on the court by a score of 72-70 on Feb. 11 on the Herlong home court.

GHS finished the season with a record of 16-14 overall and 6-2 in the Pioneer Mountain League.

The Indians finished second behind the Loyalton Grizzlies and ahead of Westwood, Herlong and Downieville.

In playoffs there are four teams that look like trouble with Greenville still hovering near the top. The tough ones look to be Big Valley (10-4), Hayfork (12-1), Happy Camp (10-4), and Butte Valley (10-4). Greenville fits in right after those four so let’s see how the ladder matches the teams up during the first rounds of playoffs. There are 18 teams in Div. 7 of the Northern Section playoffs. Plumas Charter will also compete in this division.

The Indians wrapped up their league play with a 4-2 record and 16-9 overall. They finished second in the league behind the Loyalton Grizzlies. But their win over Mercy Feb. 10, the previously number one ranked team in Northern Section Div. 7, earned the Greenville Indians the number one spot! Let the playoffs begin!

Goodson was slick picking up 15 rebounds, Fieldson got under the key to pick up 10. All members of the Indian team did their part cleaning up and gathering rebounds. Bustamante picked up five, Morgan Tyler and Banchio four, Justina Jaimes three, Emma Hampton two and Stella Balbiani and Ashlyn Heard both picked up one.

All Indians stayed on the court with no members fouling out. The out-of-league game proved to be a good tune-up for the girls as they headed to playoffs yesterday, Feb. 18. Tune in next week for details.

The Greenville girls pulled off another win Feb. 10 as they faced the team from Mercy. GHS ran away with the first quarter to lead 22-7 but the Warriors said “whoa” to that and scored twice. The score at halftime was 27-17 GHS.

The closest quarter of the game was the second where the Indians put up 15 points and the Warriors added 13 leaving the Indians still leading, 42-30. Greenville continued to dominate the court scoring 2 points more than Mercy in the final quarter to reaffirm the win.

Goodson led in scoring with 16 points and Bustamante was right behind with 14. Ashlyn Heard pulled off 9 points for the Indians, Fieldson 8, Banchio 4 and Tyler 2. Bustamante landed a pair of 3-pointers during the game. Goodson hit four of her eight free throw opportunities.

Bustamante was a real thorn in the Warriors side instigating 10 turnovers and stealing the ball four times. Goodson was a problem for the Mercy girls as well gathering up 20 rebounds, Fieldson picked up 11 and stole the ball five times.

Three Indians collected three personal fouls each, Fieldson, Bustamante and Banchio but all members of the team stayed in the game for the duration.