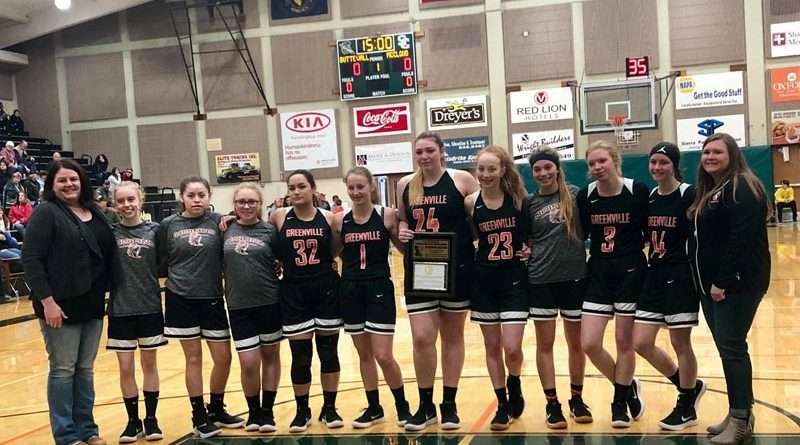 In a tight final match battling for first place in the Northern Section CIF Championships, the GHS Indian girls fought for the title in overtime after a 60-60 tie in Chico on Feb. 23. Surprise Valley won by five points with a final score of 67-62.

“Greenville girls finished our season hungry for more!” said GHS head basketball coach Bridgett Bustamante. “We left the Butte College gym feeling like we have more to show and prove.” And the Greenville girls were tough.

The Surprise Valley Hornets came out of the hive with a sting in the first quarter 17-9. But the GHS Indians were on the court to win and came back with 20 points to outscore those Hornets (13) before the half.

Still on a rampage, the Indians rode through quarter three with 19 points to the Hornet 11 and took the lead for the first time in the game 48-41.

That must have really stirred the hive because the Hornets came back with a fierce 19 points of their own while holding the GHS girls to 6. That tied things up for a 60-60 fourth quarter. But, there are no ties in basketball and especially not in championships.

In overtime the two winning teams battled to a close finish where just 3 points separated first from second place. “We played aggressive, and fought for every point we got,” said Bustamante. “The girls left it all on the floor. I couldn’t be more proud of their hard work and dedication.”

The GHS girls were slick stealing the ball; Botts and Bustamante each stole the ball three times while Brown, Banchio and Goodson snagged in one each. Bustamante had seven assists, Brown three, Banchio two and Botts one.

Sophomore Julianna Fieldson is credited with two turnovers as is Botts and Goodson. Bustamante and Banchio were responsible for four each and senior MacKenzie Brown instigated the most turnovers with five.

Bustamante picked up five personal fouls. Botts, Brown and Goodson all had four and Banchio and Fieldson had one.

“Looking back at our season this year, I see the growth of a team. We supported each other every game. Win or loose,” said coach Bustamante. “We focused on fundamentals every practice, and pushed to get better. We put plans in place every game. Sometimes they worked, sometimes they didn’t, but the team always came together in the end and never gave up on each other.”

Already inspired to return, “We are looking forward to next season!” said Bustamante. “Our team would like to thank all the family and community members that supported us throughout the season. It is a good feeling when the gym is packed for the games!
Go! INDIANS!” Indeed.