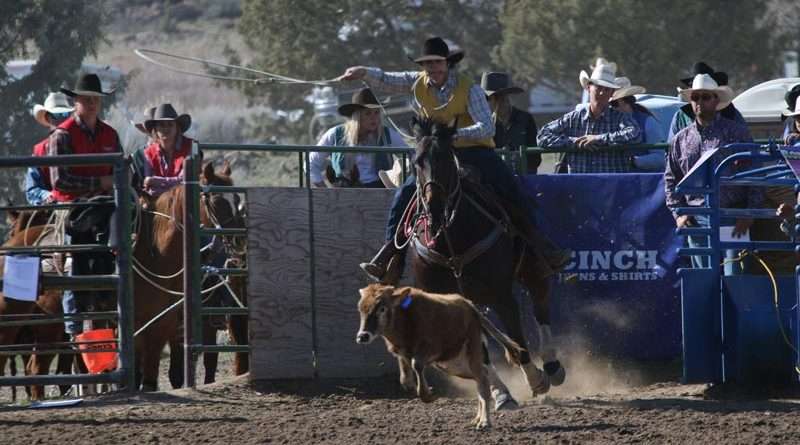 Jesse Clark gets out for a good start in the tie down event.
Sports
April 6, 2018April 4, 2018 Mari Erin Roth, Sports Editor

Feather River College Rodeo wrangled in Susanville at the Lassen College Rodeo on March 30 and 31. With two days of sunny competition, riders were able to get warmed up and out of the rain and snow of Plumas.

For the opening of the final performance Saturday afternoon at 4 p.m., the announcer gave an emotional pitch for patriotism as the American flag was carried around the arena. A western twang permeated the speech of many spectators and wranglers while dust covered just about everything in sight.

Observers climbed atop tall metal rails to watch as riders and livestock strength and agility were tested and timed.

Young calves, bronco horses, goats, long horned steer and bulls waited in pens while riders mounted horses and otherwise were made ready for the tense few seconds ahead.

A large staff from Lassen diligently directed members from each school to keep the event safe as it could be for all participants both four-legged and two. Rodeo teams readily jumped in to take their turns rounding up strays and keeping the arena controlled.

Look for the results of the Lassen Rodeo in next week’s sports section.

FRC rodeo competed in their first events of the season March 8 and 9. The team participated in events held in Coalinga, at West Hills Community College, followed by CSU Fresno College Rodeo March 10 and 11.

“Feather River College had two bull riders step up and make some important rides,” said FRC rodeo coach Riley York. Kolby Bravos placed third in Coalinga and first in Fresno “rocketing him to the top of the year-end standings,” said York.Logun Gulden made a strong riding in Coalinga, winning that event and moving him up to a tie for fourth in the standings.

In the second rodeo event at Lassen, first place prizes were won by FRC Eagle Gayski in Barrel Racing, Pearce in Team Roping and Gulden in Bull Riding. Manner earned a third in Barrel Racing and Opie took fifth in Steer Wrestling.

Friday and Saturday, May 4 and 5