“We groomed midday on Jan. 2 from the Jamison Trailhead only,” said Ken McMaster about the approximately 12-kilometer trail system at the Plumas-Eureka State Park.

“The Museum Trailhead area is lacking snow and too many open spots without snow. The first several hundred yards on the Jamison side are spotty with snow, but after that, the skiing is pretty good.” McMaster said, “Did not set any track but concentrated on smoothing out the trail, getting rid of ruts as we could. Have not groomed much so far this season due to mechanical issues with machines, but we are back up and running … only need more snow.”

Snowshoeing is a good option, as well as striding. “Would not advise skate skiing as yet,” said McMaster. “We will groom again only after more snow. … There are approximately 4 kilometers of groomed skiing available. Enjoy what there is!”

McMaster gave a special thanks to all who have supported their volunteer grooming program in the past (no state funds are used for this program) and to all the volunteers who donate their time to the trails. McMaster added that if you haven’t this year, please consider donating to keep those efforts ongoing.

Again, this year, the ski hill’s entire funding comes through donations to PESPA — Plumas Eureka State Park Association, P.O. Box 1148, Graeagle, CA 96103. There is also a donation slot on the Museum door at the Museum Trailhead.

There are no trail fees, but trail users can donate to the program. Suggested donations are $5/day per person, $25/person for the season and $35/family for the season.

JAMISON TRAIL: Groomed, no set track, patches of open ground in the first couple hundred yards. Good skiing after that. 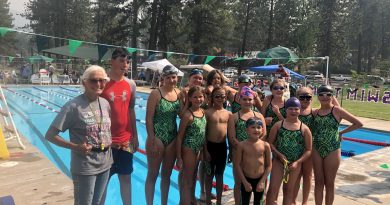