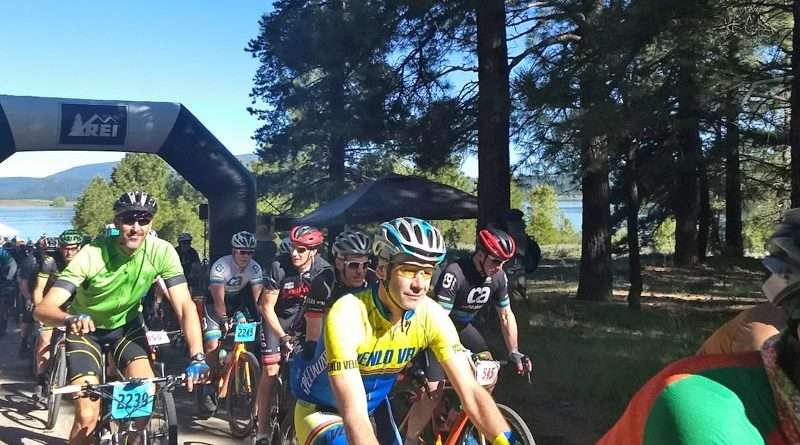 Plumas local Chris Anderson competed in the age 51-60 category in the Downieville Classic Aug. 1 through 4. It was Anderson’s second shot at the big race. He is relatively new to the sport but has been “all in” since he decided to give it a try. “It was tough,” said Anderson, who admitted he may not attempt the Downieville run again. “If you make a mistake it’s not a band-aid, it’s a helicopter ride,” said Anderson, who is a chiropractor by trade.

This September Anderson will be competing in his third shot at the Grinduro. The race takes place Sept. 27-29 and is based out of the  Plumas-Sierra County Fairgrounds in Quincy.

Anderson started riding mountain bikes in his 20s and then stopped. He got back into it 15 years ago and for the past six years he has focused more intensely. Anderson’s involvement with the Lost Sierra Composite Mountain Bike Team for riders age 6-12, has been a big part. Last year his daughter, Kylie Anderson, earned a bike through Sierra Buttes by doing seven days of trail work and also volunteered at all the races Sierra Buttes Trail Stewardship races.

Kylie raced with her dad in Susanville for Ridin’ High. “That was her first race,” said Anderson, “and she got second place on 9 mile course.” Kylie is now 16 years old and interests change. But dad is still riding.

“I rode the Lost and Found last year, did the 100 mile race and it was rough,” said Anderson. “I did great at 65 miles but the rest of it was tough.” Other race rides this year included a 50-miler in Carson City and a Total Body Fitness race in Folsom.

With Downieville finished, Anderson is aiming at Grinduro, “It’s easier than Downieville’s two-hour climb which is brutal.” He said they are both tough, just in different ways.

Riding to Lake Davis and back, 90 miles, is what Anderson considers a training ride. Why does he do these rides? “I wanted to see how I would do on the ride, I wanted to put maximal effort in and see how well I could do.” Anderson says he is competitive, “When I signed up for the races, then started training. I love the level of fitness that I have achieved but the amount of time that is invested is hard to swallow.”

Basically he is just trying it out. “It’s a big perk to be able to ride up to the top of Clairmont and notice, wow this is epic,” said Anderson. “It’s a great example for kids too, we can do anything we want if we put the work in, cliché but true.” There is a big local mountain bike community that provides companionship for riding.

For Grinduro, Anderson is hoping to get onto the podium. He did well enough last year, 2 minutes from the podium times in 2018 to “tease” him into thinking he might get there this year.

There is warm up ride two weeks earlier hosted by Mountain Circle around Indian Valley and up to Antelope Lake called the Bear Growl Gravel Grinder Sept. 14. The ride isn’t easy, but it’s not Grinduro. The terrain ranges from 33 miles to 101 miles and riders have options to train on gravel or fully paved courses.