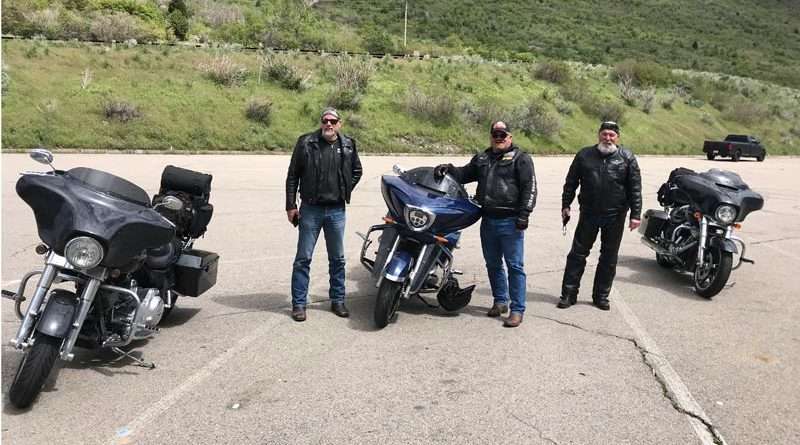 Gerry Hendrick, Jim Cooke and Steve Berry had an idea to ride their motorcycles across country to the oldest motorcycle rally in the world. Laconia Motorcycle Week 2019 took place June 8 through 16 in New Hampshire, as it has since 1917 when the first annual Gypsy Tour was hosted at Weirs Beach in Laconia.

The trip of a lifetime was an attraction for the three men with a wide spread of road bike experience ranging from two to 39 years. It took about a year of planning, “and saving money,” said Berry, for the three riders to successfully ride their motorbikes to and from the Laconia event 2,524 miles away. A “bucket list” developed of places with enough high interest to try and include on the trip. The list included Gettysburg, Washington, D.C., the Baseball Hall of Fame, Thomas Jefferson’s home in Monticello, the Million Dollar Highway, the Milwaukee Harley Davidson Museum in Iowa, Orange County Choppers and Antique Archeology to name a few.

“My list included Bryce Canyon, the Blue Ridge Parkway and the changing of the guard for the Unknown Soldier,” said Hendrick.

Before arriving at the big destination rally, they took part in the Americade Rally in Lake George, New York, June 4-9. This rally is a relative newcomer to the scene as it was established in 1983.

After Americade the trio headed to their easternmost point of their trip, Maine, to sample lobster rolls June 10. They traveled through the White Mountains and up to Mount Washington where the wind reached a speed of 231 mph in 1934.

It was smooth sailing all the way, “Thanks to Gerry’s navigation and organizational skills,” said Berry. “He did a great job of planning, we wouldn’t have made it without him.” The men had motels lined up all along the route with no need for outdoor camping during the trip.

One highlight was the Million Dollar Highway running from Montrose to Durango, Colorado. Another was the trek through Ohio, Pennsylvania and upstate New York in the Amish Country. “We even met a guy in New York from Paradise,” said Berry.

Items on the bucket list came on and off depending on weather and road conditions, but the men did get to most of them. Kersting’s Motorcycle Museum in Winamac, Indiana, was a surprise hit. “It was out in the middle of nowhere,” said Berry, “literally in the middle of a cornfield and we just stumbled upon it.”

Two members kept a journal during the trip. “The grandkids will either say ‘Grandpa was cool’ or ‘these are the ravings of a madman,’” joked Hendrick.

The coldest point was 38 degrees on Monarch Pass in Colorado. The hottest was 102 degrees in Monument Valley on the Arizona/Utah border.

The trio visited three of the five Great Lakes: Michigan, Erie and Ontario. “Jimmy pulled off his boots to wade in the lake,” said Berry. They traveled through 22 states and visited the headwaters of the Colorado River near the Continental Divide. They rode alongside 100 miles of the Missouri River, 100 miles of the Mississippi, and visited the headwaters of the Hudson River. Traversed the White Mountains, the Catskills, Adirondacks, the Blue Ridge Mountains, Bryce Glenn Monument Valley and Capitol Reef in Utah.

They only lost one rider briefly in Chicago, Berry, and only Hendrick had a short-term mechanical problem, a voltage regulator, that was quickly replaced.

The Plumas riders said they met a lot of people on the road, “Everyone was interested in what we were doing,” said Cooke. They met quite a few people from Canada.

“The Canadians were impressed how well we honor our veterans, it’s not like that in their country,” said Hendrick.

“I was surprised how many people were visiting at Gettysburg and the Arlington Cemetery,” said Cooke. “All ages, and they weren’t playing with their phones.”

American flags inspired the men on their trip, “they were on peoples porches, everywhere,” said Hendrick. “Everything east of the Rockies, east of Ohio, people took real pride in their property and ownership.”

The three agreed, the worst roads were found in Vermont; and Omaha, Nebraska, received special mention due to flooding. Motorcyclists generally put the highest-octane gasoline in their tanks that is available. East of the Rockies the highest octane was 93 and it was under $3 a gallon. Good to know.

Once complete, the whole adventure included 8,900 miles, traveling an average of 300 miles each day, and took a month to complete. “Generally we would ride for three to four hours in the morning,” said Hendrick, “and then we would take a break to play for three or four hours, and then ride another three or four hours before the day was finished.” The trio departed May 29 and returned home June 26.