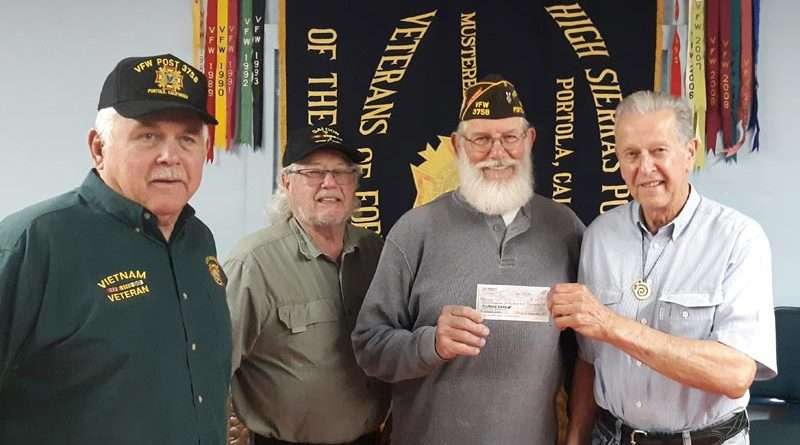 Several members of Portola VFW Post 3758 were on hand to accept a check for $245 from the Graeagle Grassroots Cribbage Club. The money represents the proceeds from the sale of cribbage boards donated to the card group by the VFW for their use. However the players had plenty of their own boards already and decided to make this a fundraiser for the VFW instead. From left is Pat Fruchtenicht, Tom Herviy, Post Commander Steve Ross and Doug Rodrigues, the cribbage club’s founder and director. Photo submitted
Graeagle Peggers Sports
November 13, 2019November 12, 2019 Doug Rodrigues

At our Saturday, Oct. 2 gathering, we had 12 players and, interestingly, we did not have any visitors or guests playing that day. Perhaps it was because there was a cribbage tournament in Carson City that same day.

First-place honors went to Darlene Pekovich who posted 15 points with seven wins on her scorecard. I (Doug Rodrigues) took second place with a 14/7 score and it was a photo finish for third and fourth place between Dave Boynton and Brad Archer from Reno, both having identical 13/6 cards, but Dave had plus-50 in the total points pegged differential and Brad’s spread was plus-33. By the way, we heard that Brad played in the Canadian Doubles event at the Carson City tournament that evening and his team took second place. Congrats Brad!

There were three 24-hands held by Darlene, Steve Frank and Janet Miller, who got the last one to win the 24-Hand Pot. Steve and Brad were the only two players to get a 4-of-a-kind hand and Steve drew the high card to determine who won the 4-of-a-Kind Pot.

There is a major tournament in Reno, the 34th Veterans Day Cribbage Classic at the Sands Regency. Additionally, there is a tournament in Topaz, Nevada, and another in Susanville, prior to the Veteran’s Day Classic so some of our players will be playing in all three. However, we will still have our regular grassroots tournament for those not playing in the others.

The Graeagle Peggers Grassroots Cribbage Club meets at Gumba’s Family Pizza in Blairsden every Saturday for a nine-game tournament. Check-in is at 10:45 a.m., and play begins at 11 a.m. The American Cribbage Congress sanctions the tournaments that qualify when we field enough contestants each week.

For more information or questions, contact me, Doug Rodrigues, the club’s director at 836-4254. Players of all skill levels are welcome!