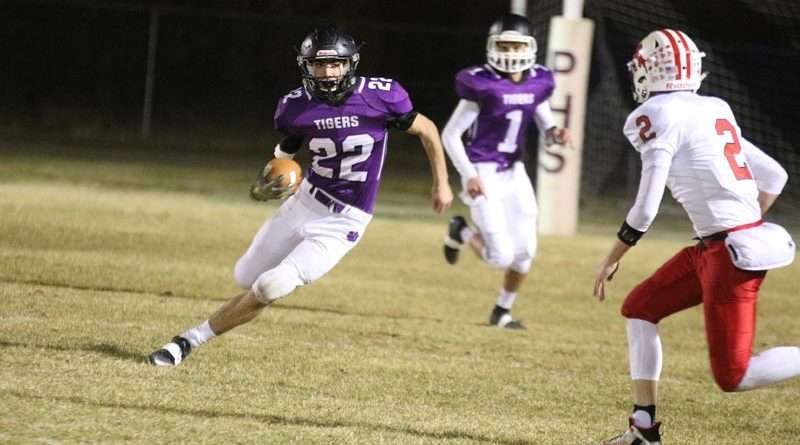 The Tigers were victorious over the Etna Lions, again, only this time during Northern Section playoffs Nov. 15 in Portola.

The tough Portola Tigers beat the Lions for a second time in two weeks in a battle that really mattered. The Tigers first beat the Lions Nov. 1 by a score of 19-12 in Etna for the final league game of the season.

The two teams returned to meet in Portola on Nov. 15 for the first round of section playoffs. The Tigers won in a close, close game, 21-20.

To make that happen, junior quarterback Dylan Gonzalves completed six of 12 pass attempts for 27 yards. He carried the ball four times himself for a gain of 12 yards, one time past the goal line to score for the Tigers.

Junior Shane Curren had another great game carrying the ball 16 times, scoring a touchdown and picking up 102 yards rushing for Portola. Junior Diogo Juarez carried the ball four times for 7 yards. Junior Zach Mulhall carried twice for a total of 7 yards, and scored a touchdown in the process. Junior Carver Wearin had a carry for 2 yards.

Bowling, Ruiz and Loomis all made fumble recoveries. Curren made three kickoffs totaling 88 yards and three punts totaling 106 yards. Kickoff returns were handled by Koski for 12 yards, junior James Sampson for 10 yards and Diogo Juarez with no yards gained.

This week, the Tigers went Tiger head-to-Bulldog head in Fall River on Nov. 22 for the championship semi-finals. It was the first Bulldog battle in the Northern Section playoffs as they received a bye for round one.

The Fall River Bulldogs finished league with an 8-2 record. The winner of the game between the Tigers and the Bulldogs will play today, Nov. 27, at 7 p.m. in the Northern Section Division 6 championships.

Biggs Wolverines (9-1) had a bye in round one and jumped to the semi-finals to play the Los Molinos Bulldogs (6-3) who beat the Maxwell Panthers (4-6) on Nov. 15. Read the details of the semi final championship game for Portola next week, here in Sports.