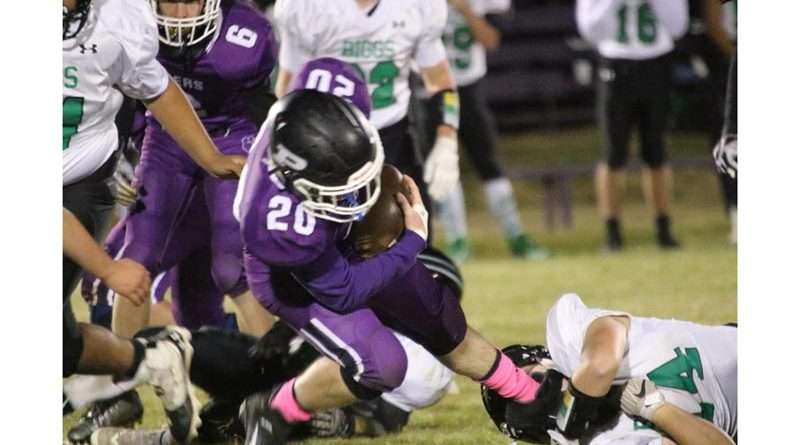 It takes time to calculate game stats. There was considerable anticipation building up to the football game with the Biggs Wolverines that took place Oct. 25 in Portola. The Tigers lost 23-49, but the game was filled with plenty of thrills to keep fans warm in the PHS stands.

The game’s first quarter finished in a tie between the two teams, 7-7. Portola scored another TD and extra point in the second quarter but the Wolverines added three touchdowns, two extra points and a 2-point conversion, 29-14.

The third quarter was tight, a TD for the Tigers and a TD and extra point for Biggs, 36-20. The final quarter, the Tigers managed a 3-point field goal and the Wolverines added two TDs and an extra point for the final score, 49-23.

Receiving for Portola was senior Keegan Folchi catching two passes for 38 yards. Juniors Curren and Owen Bowling each caught 22-yard passes. Curren’s all purpose total was the highest for Portola, 186 yards. Senior Taylor Koski took a kick return 33 yards and an interception 39 yards for a total of 68 yards toward the PHS end zone. As a team, the Tigers pulled off gains of 409 yards.

Portola beat Etna on Nov. 1 on the Tiger home field. Neither team scored the first quarter. Portola Shane Curren broke the stalemate and scored a touchdown with a 61-yard run. The extra point kicked by PHS Dominic Bautista was good. The Tigers took the lead over the Etna Lions, who scored a TD but were allowed no extra point, 7-6 PHS.

Only Portola scored in the third quarter as Curren carried the ball for a 35-yard run, 13-6. Both teams crossed into the end zone in the fourth quarter. Curren dominated by scoring the final Tiger touchdown, 19-12.

Two passes thrown by junior quarterback Dylan Gonzalves were caught by senior Taylor Koski for a gain of 44 yards. The majority of the Tiger gains were achieved rushing. Gonzalves handed the ball to Curren 20 times who carried them a total of 188 yards. Diogo Juarez turned nine carries into 33 yards. Zach Mulhall and Mario Ruiz each had four carries, Mulhall for 27 yards and Ruiz for 16.

A pair of juniors led the Tiger defense, Xander Loomis and Diogo Juarez made 10 tackles each. Owen Bowling had nine and senior Chase Nielson made eight. Carver Wearin and Zach Mulhall both made six tackles each.

Bowling and Nielson teamed up to sack the Etna quarterback. Curren made four kickoffs for 126 yards and four punts for a total of 134 yards. On the other side of things, Curren, senior Keegan Folchi and Mulhall handled the punt and kickoff returns for a total of 55 yards.

Next for the Tigers, after a league bye Nov. 8, is Portola’s first match in the Northern Section playoffs. As luck would have it, the Portola boys drew the Lions as the first challengers for playoffs. PHS will go head-to-head with Etna Nov. 15 in Portola starting at 6 p.m.