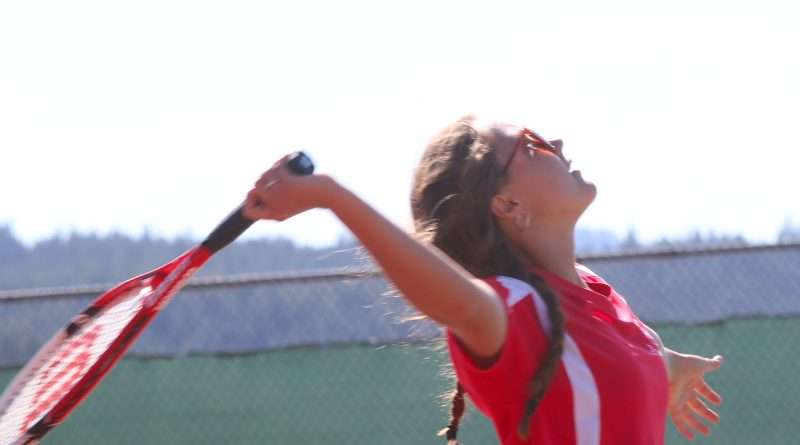 Sabina Winter has her back to the sun as an advantage during her serve May 10 in Quincy. Photo by Mari Erin Roth
Sports
May 20, 2021 Editor

It was a great season even though we only played two schools,” said Quincy High School tennis coach Sara Gallagher. “Paradise Adventist is a strong team, but we played well against them, it was a positive challenge. Downieville was a small but very accommodating team, their players played double matches so all our team could play which was great. I really wanted the kids to play other opponents.”

Gallagher organized a community tennis event mid May that attracted local tennis buffs to the Quincy courts. “The community match was fun and a nice way to end the season,” said Gallagher. “Thanks to the 10 community, parents, teachers, and friends who participated and made it happen for the QHS tennis team.”

The tennis season is just beginning for locals, after a nice little snow May 20, and there are courts at various places around the county that are open to the public. Gallagher is one of the players that can be found out on the courts during the sunshine months locally. With any luck, Gallagher will be back next season, in what we all hope will be a more normal athletic season for sports. Regardless, that the 2021 season happened at all was a real plus for everyone. “I really enjoyed working with this group (QHS and competitors), a great group of student athletes,” said Gallagher.

Compiled by Mari Erin Roth [email protected] Lake level has begun to recede at Lake Almanor; it is down a couple…

Twenty-two players braved the heat for the final round of the two-round 2021 GMWGC Captain’s Cup June 17. The format…

Tigers and Trojans light up court for final games