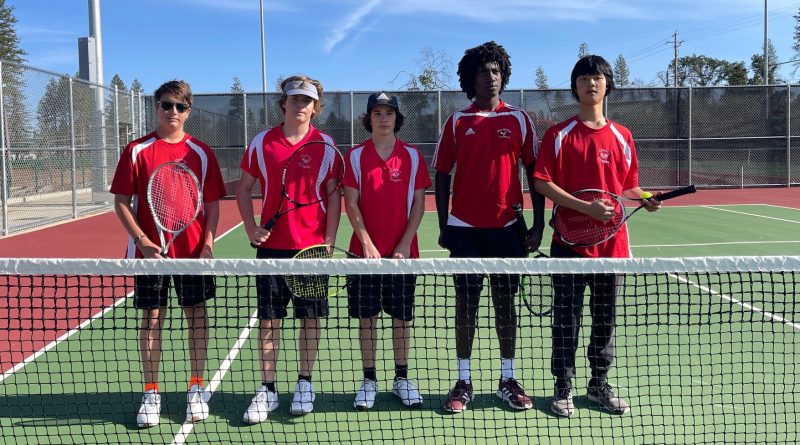 “Connor Pangburn went 3 sets in singles with a very good match up that could have gone either way,” said Gallagher. Quinn McMichael won his first round singles 4-6, 7-6, and 10-7. McMichael lost his second round to the number 2 seed player. Elisha Vanasinchai won his first round singles 6-7, 6-2, and 11-9. He lost in the second round. Kaleb Dupras was seeded number 3 overall and got a bye for the first round. He won his first match in two sets then won in a very competitive match against the number two seed player 4-6, 7-5, and 10-5.

“This was, most agreed, the best match of the tournament,” said Gallagher. Quinn and Gabe Fletcher played doubles and lost to the home team Paradise. On the second day of the tournament, Dupras and Vanasinchai played together in doubles.

“Getting off to a slow start, all were tired from Saturday’s matches, the pair pulled off a 9-7 win,” said Gallagher. Dupras followed playing singles against the number 1 seed from Willows and lost in two sets. “Dupras had played this same player one time earlier in the season and went 3 sets in a very close match,” commented Gallagher. That same Willows player went undefeated this season. Dupras and Vanasinchai played their second doubles match to lose 5-8.

“Overall, a great showing for Quincy, who only had 5 matches in this league to the 15 matches the other schools played,” said coach Gallagher. “It was really a great experience for the team.” Kaleb Dupras received a medal and will go on to participate in the sectionals tournament on Friday in Redding.