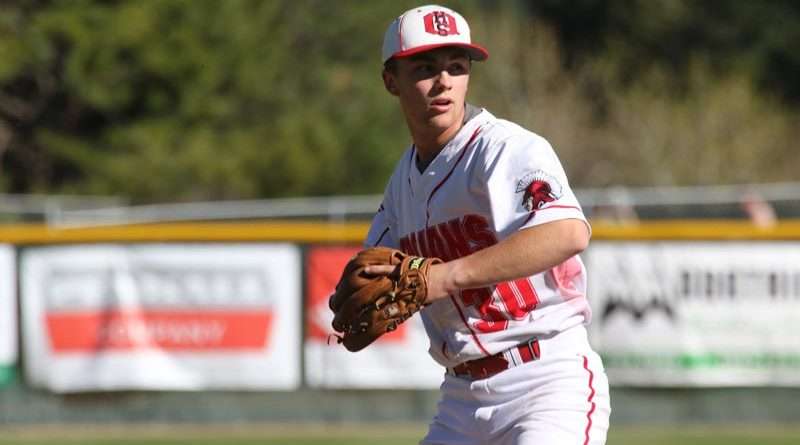 Brady Peay in action on the mound pitching two innings.

The Trojan baseball team didn’t win the one and only home game they had this season, but it sure was a great game with their neighbors, the Loyalton Grizzlies, April 22 on the Feather River College baseball diamond. The Grizzlies won the game 12-10. High scoring games are always a favorite with the fans, so the game was a real treat and the weather was ideal.

“We’ve had a pretty good season so far despite the weather and all the traveling,” said QHS head baseball coach Brad Sylvia.

Johnny Pini led the scoring for the Trojans with three trips across home plate. Two runs each were scored by Dominic Rinetti and Lane Coelho. Single QHS runs were scored by Kai Hosstetter, Canaan Newman and Justin Garner. Dominic had a heck of a game hitting four RBIs that included two triples! Pini managed to steal a base from the Grizzlies. Cameron Schmidt, Lane Coelho and Johnny Pini all hit RBIs.

Pitching for the Trojans was handled by freshman Caden Hendrickson, junior Brady Peay and sophomore Justin Garner. Hendrickson struck out five batters of 14 faced. Garner struck out two of 14 batters and Peay struck out one of 15 batters.

“We are young and for the most part have had opportunities to win games against higher divisions. We realize if you want to play baseball in March and April you are probably going to have to travel. Every year we try to make a competitive schedule that will make us better once league and playoffs come along.”