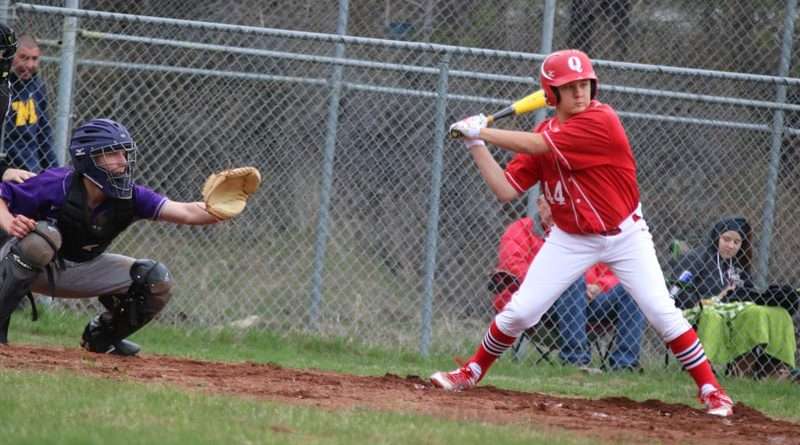 Johnny Pini is part of the Trojan winning wave as he hits and scores for QHS after a four-inning drought.
Sports
April 18, 2018April 26, 2018 Mari Erin Roth, Sports Editor

The Quincy Trojans bested the Portola Tigers on April 10 in a rainy game that ended 12-9. Neither the Tigers nor the Trojans were willing to cancel the battle of rivals in Portola even though rain seemed certain. There was a whole different story when raindrops began to fall in the beginning of the fifth inning.

The Tigers had been doing a terrific job on defense and kept the Trojans completely off the scoreboard the first four innings, leading 7-0. Neither team was willing to let go for rain. Ballplayers were on the field and committed to battle it out to the end, if at all possible.

“Stay tough,” said PHS head baseball coach Tim Brubaker to the Tigers, “They aren’t giving up,” advised Brubaker. And he was right as those Trojans rose to the occasion scoring four runs in the top of the fifth inning with dark clouds above and the gentle patter of persistent drops falling.

“Don’t give up, you are still in the lead,” Brubaker reminded his team. And the Tigers listened adding another two runs to their lead in the bottom of the fifth, ending the inning 9-4.

The Quincy boys came back with equal force and scored another four runs in the sixth. They then held the Tigers’ scoring to zero. Ouch. But the Tigers held the lead 9-8 as the teams headed into the seventh and final inning of the game.

The Trojans were fueled by some kind of secret power cell and burned another four runs into the scoreboard, taking the lead for the first time in the game. Four runs scored three innings in a row: the Trojans meant business and held the Tigers to zero runs thus taking the game from the home team.

It was a game well worth enduring the raindrops as the Portola/Quincy games always are. The healthy competition seems to bring out the best efforts from both teams regardless of in which sport the rivals are competing.

Quincy pitchers taking the mound against the Tigers were Hall, McQuarrie, Garner and Anakin Borghi. Hall struck out four Tigers, Borghi three and McQuarrie one.

In the field, Jacobson had four assists. Helbig and Bok each had five put outs. Cabral put out four and Callahan got three.

Helbig served as catcher to Tiger pitchers Jacobsen and Ross, as well as Cabral who struck out four Trojan batters.

This was the first league game for both teams. The Tigers are 4-8 overall. They took on their neighbors the Loyalton Grizzlies yesterday for an away game.

This Friday, April 20, the Tigers will play in a doubleheader set of away games against the Esparto Spartans. Then the Chester Volcanoes on the CHS diamond Saturday, April 21, at 1 p.m.

Finally returning home, the Tigers will play the Modoc Braves at 4 p.m. on Monday, April 23. A return match against Quincy will follow Tuesday, April 24, on the Trojan home field at 4 p.m.

As for the Quincy Trojans, they sit 1-0 for the league and are 8-4 overall. The Trojans are ready for sunny skies and home games. After a pair of games against Esparto on Friday, April 13, the Trojans will play Biggs in Quincy this Friday, April 20, at 1 and 3 p.m. After hosting the Tigers for a rematch April 24 the Trojans play a doubleheader in Maxwell on Friday, April 27, another in Loyalton on Monday, April 30, and end the season with a home game against the Grizzlies on Monday, May 7.