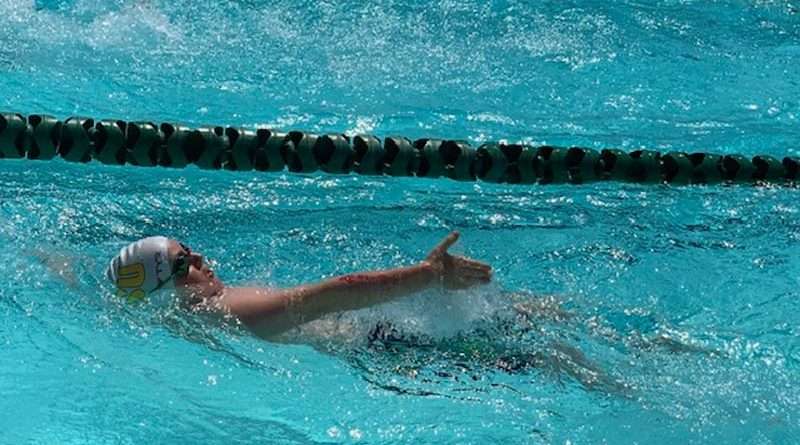 The Plumas Rapids Swim Team traveled with seven swimmers to represent Plumas at the Paradise “Nothing But Love” swim meet July 6.

The Durham swim team co-hosted the event with the Paradise crew. “The Paradise Camp Fire displaced many, including the Paradise Piranhas (swim team),” said swim mom Amber Hughes. “It was a huge one-day event with an outpouring show of support from teams as far away as Etna, Plumas County, and an abundant number of valley teams.”

It was a great day for the Rapids swimmers. Tatum Hughes beat her own time to win the heat, scratching off numerous seconds, bringing her up to place seventh overall in her age group for the 100 butterfly.

Mave, Lucius and Violet Kitchens competed, with the littlest Kitchens breaking the water for the first time at a swim meet.Quincy and Carter Peterson and Blake English all swam for Plumas Rapids.

“All came to compete, some for the very first time, with the attitude of, EAT MY BUBBLES,” said Amber Hughes.

Plumas Rapids swimmers competed June 28 through 30 at the Gridley Gator-hosted swim meet. The Plumas boys ranked eighth with 177 points and the girls ranked 11th with 98 points.

Reilly Vaughn placed first in the 12-and-under 50-yard breaststroke with a time of 49.77. Savannah Little placed first in the ages 13 to 18 girls’ 200-yard butterfly. Coach Paul Vaughn was on hand to support the team and help where needed. “Twelve swimmers from our team competed, finishing in places first through 19th,” said Plumas Rapids President Aimee Rolin.

Plumas Rapids will be hosting their own home swim meet this Saturday, July 20, and Sunday, July 21, at Pioneer Pool on Fairgrounds Road in Quincy.

The Plumas Rapids Open is the highlight of the season for the many dedicated athletes and supporting family members. The public is invited to attend and cheer poolside for their favorite swimmers, or better yet, all of them!