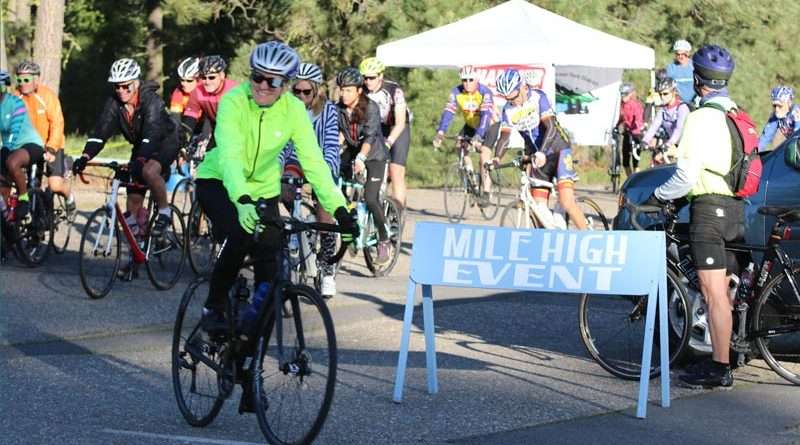 Two hundred and twenty riders participated in the Almanor Recreation and Park District (ARPD) 36th annual Mile High 100 road bike ride June 16 around the scenic lake. In the cool of the Chester mountain morning air, upbeat music filled the air. Karma Chameleon and Love Shack at 7 a.m. fit perfectly with electric neon colors of biking outfits, high-visibility helmets and bright smiles of waiting riders. Comments collected by organizers from riders indicate the event was a huge success. The increased turnout for the 2018 ride halted the decline in participation the event saw over the previous five years.

The proceeds from the event are invested in organizing and creating recreation in the Almanor Basin including the support of the district’s Youth Sports Programs, the Truman Collins Sports Complex, and Trails Around the Lake planning according to Garrett.

This year’s Mile High 100 Coordinator was Randy Robbins, who coincidently is also the president of Susanville Area Bicycle Association. “I was honored to be asked to help ARPD put on the Mile High 100 this year. I am very pleased with the turnout and the feedback we’ve received on the ride,” said Robbins. “With our amazing volunteers, along with the addition of our very supportive local sponsors and industry sponsors like Chamois Butt’r and Hammer Nutrition, we were able to confidently advertise this event as one of our area’s premier century rides, which it is.”

“The beauty of the ride is unmatched and riders from all over the west are realizing that,” said Robbins. Cindy Wolff and her husband Steve agree. They come from Chico each year to participate. “There should be throngs of people,” said Cindy, elaborating on the scenery and the clean environment. Word is getting out, numbers were up from last year and organizers say they anticipate Mile High 100 will continue to grow. “Next year will be even better,” said Robbins. “It was indeed a community effort.”

Three routes were offered: a half metric ride (33 miles), a full metric century ride including Warner Valley (56 miles), and a full century ride (108 miles) which included Indian Valley and a lunch in Taylorsville.  The Century and Metric Century rides attracted approximately 85 riders each and the half metric drew about 50 riders.

One of the niceties on big group rides is the abundance of ‘rest and refresh’ stations along the way. Carol’s Café in Prattville prepared an after-ride meal at and Young’s Market loaded up a taco bar for century riders at the market’s Taylorsville location.

Susan España, ARPD Board treasurer said, “The Feedback Survey comments were very complimentary of the meals, the home-baked rest stop snacks, and especially the eating atmosphere at Young’s Market.  A big hit was the amber ale beer contributed by Lassen Ale Works at the after-ride meal.”

Two recumbent bikes with accommodations for their dogs and two tandem bikes took part in the ride around the lake. Most unusual award, if there was one, might go to Jeff Mann of Reno on his “ElliptiGo” elliptical bike. The speed of foot pumping-power generated by elliptical riding Mann was impressive as was his endurance.