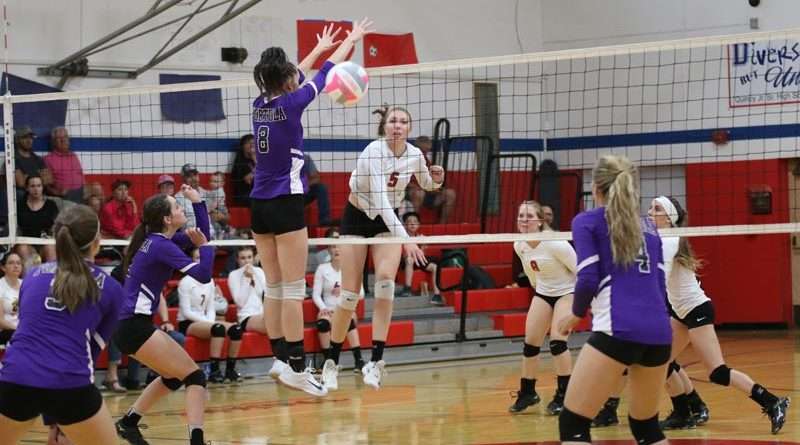 Rivalry matches bring on super human feats when the Portola Tigers and the Quincy Trojans meet on the volleyball court as they did Sept. 25 at PHS. Quincy won the tough battle 3-2 after losing the first two games 22-25 and 18-25 then turned the tables with 25-18, 25-22 and a final tie-breaking 15-10.

Right from the get go the match played out even: a point for PHS, a point for QHS. Actually, more than that, the very first rally was a clear indicator of what was to come. From serve to finish it went on and on playing like the last point of the biggest ever world championship. The girls battled hard for each and every point. Each rally was a fight to the bitter end with flying kills, dramatic saves, miraculous dives followed by a big finish. Then they would turn around and do it all again. The energy level was beyond extreme. The games were the same as the rallies: tight, neck and neck, the whole way through.

Trojan Sydney Gott and Tiger Maddie Boyd went head to head on numerous occasions, but neither team leaned solely on their aggressive frontline warriors. QHS senior Gott attempted 90 kills and landed 34 of them in the “unreturnable” range. Trojan junior Chyanne Morrison landed nine kills in 27 attempts. That’s almost 120 kill shots fired at the Tigers! But the Portola girls did not back down and fired right back. The stats were not in yet, but having witnessed the fire from the Tigers, PHS made the Trojans work for every point.

Junior Rachel Abramson served three aces in her 23 serves. All but one hit the mark on the PHS court, over 95 percent for Abramson. Trojan juniors Savanah Gay, Morrison and freshman Emmary Wingfield landed two aces each during their serves. All three landed over 90 percent of their serves.

Abramson was the key serve receiver with 33. Morrison received 15, Gay 10 and Gott picked up eight. The Quincy Trojans have a league record of 3-0 and are 16-4-1 overall.

The Tigers volleyball team is 15-11 overall and has a 1-1 league record. The girls are already planning their rematch against the Trojans on the Portola home court Thursday, Oct. 11, at 5:30 p.m.

When asked about the Quincy rivalry game, the Portola ladies all pitched in, “We are a really good team.” They said they plan to win in Portola the next time as they wandered to the locker room after having just won against the Chester Volcanoes on Sept. 26 in Portola.