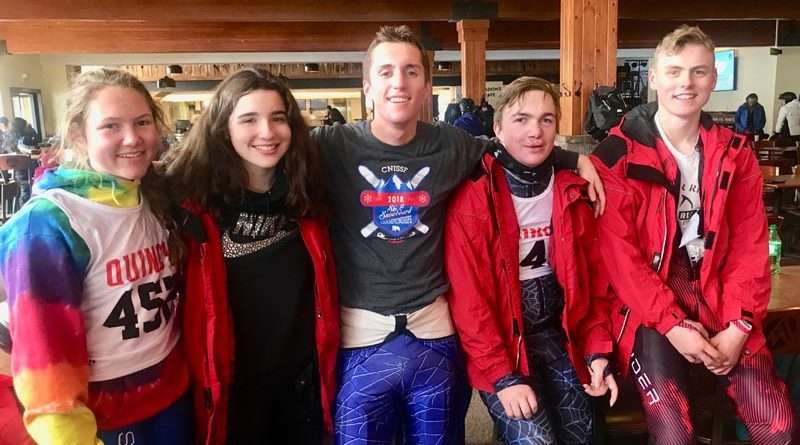 The Quincy High School ski team, now halfway through its season, has continued to place in the top five against 30 racers from much larger schools.

The team has particularly dominated in “slalom racing,” which entails tighter turns through more gates, versus “giant slalom,” where skiers pass through fewer gates but at higher speeds.

“Slalom racing is more technical, requiring more rapid body movement,” said team captain Sam Lawson. “It’s considered the more difficult of the two disciplines. Most of the Quincy skiers have come from the Johnsville Junior Ski Team (JJST) where they have only learned to race giant slalom.”

Yet, QHS skier Sabina Winter impressively took second place in the last two slalom races, and Lawson in the last slalom race placed third. The team races in the Central 1 League, against teams from Durham, Chico, Loomis and Sacramento.

The team is not far behind in the faster speeds of giant slalom. In the Jan. 27 race at Northstar, Winter retained her fourth place finish out of 22 female racers. She is being challenged for the top spot in league this season by a lady newcomer from Durham who has outpaced even the fastest boys!

Lawson came in fifth place among 30 boy racers in giant slalom, moving up from his eighth place finish in the last giant slalom race.

Another JJST alumnus, David Leonhardt, has placed 18th and 19th in giant slalom in his first year of racing, and is still learning the technical skills of navigating the gates in slalom.

The only skier on the team not from JJST is Emma Leff. Leff has been impressing all her teammates and coaches as the only skier who’d never raced and hardly skied before this year. Leff started out in 21st place in slalom and advanced to 17th in her second race, with all clean runs. She was in 20th place in giant slalom but advanced to 14th in her last race at Northstar.

From there the Quincy High team will move on to state championships Monday and Tuesday, March 2 and 3, at Northstar.