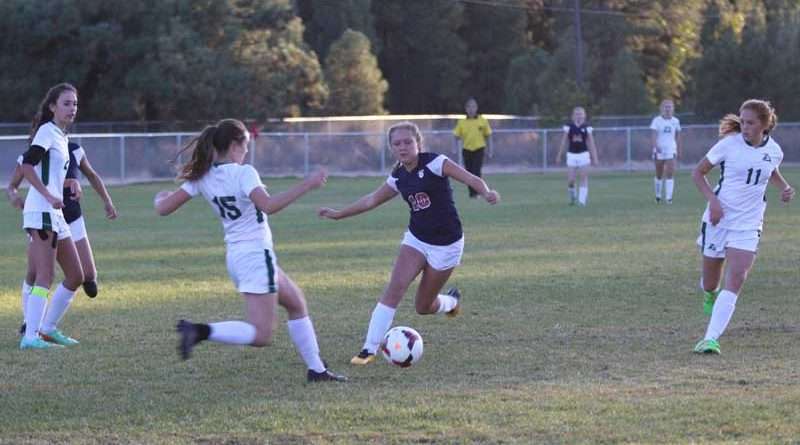 The Chester Volcano girls hosted the Quincy Trojans in a match on the soccer field in Chester that ended 3-2 in favor of the Trojans. Brenah Delacour scored both of the Chester goals.

There are challenges to playing soccer in the Sierra, say soccer coaches in and around the district. The snowy weather prohibits play during the spring soccer season and so mountain teams are faced with the task of even finding teams to play in the “adjusted to fall” season.

But teams in the area have not let that stop their soccer fever. Quincy started the season with a schedule that consisted of seven matches against Chester and one against Lakeview.

Chester initially only had two games against Lakeview planned. But things have worked out so that both teams have had much more time on the field.

Portola’s team is co-ed and has a list of five teams they played this year: Chico, Redding, Paradise, Squaw Valley and Quincy boys; they just play the teams multiple times. The Tigers wrapped up their season with a last game against Redding on Oct. 12.

Greenville didn’t have a soccer team of any sort for 2017.

The Quincy boys’ team seems to be the exception. The Trojan boys have had quite a season and are currently 10-0 in the league. They have been playing against eight different teams.

Locally hosted tournaments early in the season were a big help kicking off the season and getting athletes more time on the field practicing their skills.

Games remaining in the season, other than playoffs, are the Volcanoes vs. the Trojans in Chester on Thursday, Oct. 19, in Quincy Saturday, Oct. 28, and lastly on Saturday, Nov. 4, in Quincy.