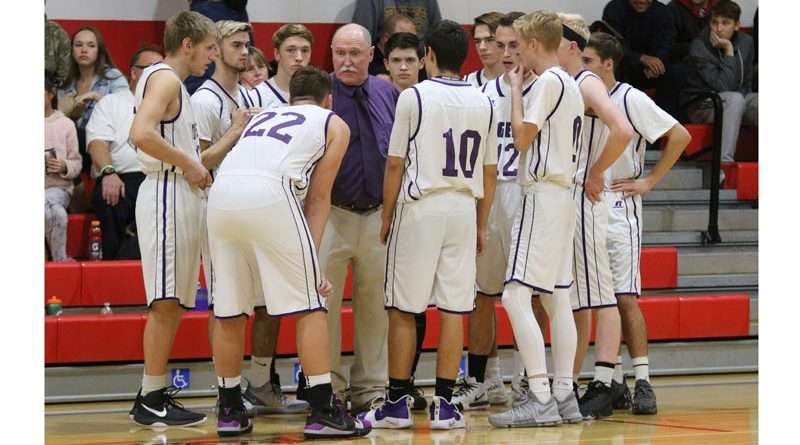 PHS head basketball coach Tim Brubaker lays it out for the boys during a quick timeout what he is seeing from the sidelines.
Sports
January 11, 2019January 15, 2019 Mari Erin Roth, Sports Editor

It takes time to enter stats into websites and volunteers for the extra duty are not always available, but we have some numbers from recent Portola Tiger games, so let’s take a look at who is doing what, where!

The Tigers played in the Modoc Tournament just before the holidays. The boys faced the tourney-hosting Modoc Braves in the initial game of the series losing 65-56.

Folchi landed three of his seven 3-pointers. Curren scored on one. Folchi was on fire sinking six of his six free throw opportunities!

Bowling and Curren led the clean-up action picking up five rebounds each. Gonsalves grabbed four for PHS. Every Tiger on the team picked up rebounds — nice work!

Fouls were high for the Tigers with Callahan hit with five, Johnston with four, Griffin with two and James Sampson, Ruiz, Nielsen and Owen Bowling all receiving one each.

In the Tigers’ second game at Modoc they took on the Lakeview Honkers to lose another really close game 59-56.

Top scoring came from Folchi with 12 points, Curran with 10 points, Johnston with 8 points, Callahan with 7 and Massey with 6. Everyone on the Tiger team scored: Gonsalves, Sampson, Ruiz, Griffin and Bowling. Go Tigers!

The game with Lakeview must have touched a nerve as the Tigers racked up a passel of personal fouls. Folchi and Gonsalves picked up three and Ruiz and Johnston each were credited with two.

In their third and final game in the tournament the boys lost in a tight game with the Tulelake Honkers, 89-81. Quarter scores tell a tale of determination by the PHS boys: 31-18 Tulelake, 47-36, 60-47 and the close final.

Folchi solicited ooh’s and aah’s from the crowd with four 3-pointers in 10 attempts, Griffin landed one of one. Massey scored all four of his free throw opportunities.

League play begins today, Jan. 9, for the Tigers as they take on the Biggs Wolverines at 6:30 p.m. in Portola.

Fans can enjoy a few home games in the coming weeks including a match Monday, Jan. 14, in a non-conference challenge at 7 p.m. with neighboring Loyalton Grizzlies.