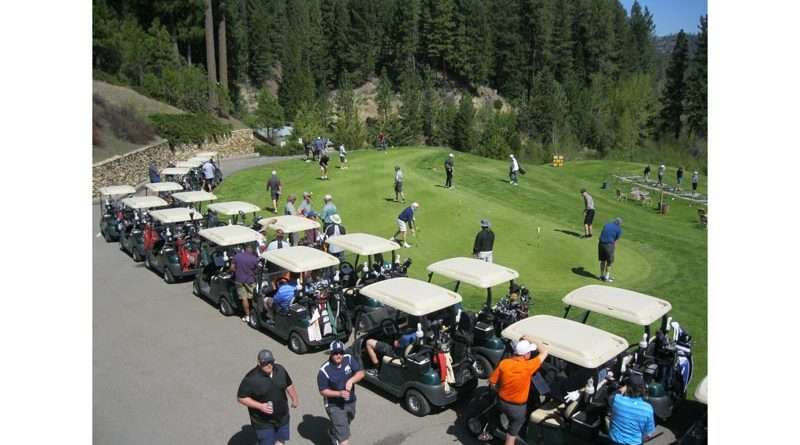 Some of the full field of 144 golfers are ready to play in the 19th annual Quincy Rotary Golf Tournament at Plumas Pines Resort on May 4. Photo by Mike Taborski
Sports
May 17, 2019 Mike Taborski, Publisher

A warm, sunshiny day along with the pristine conditions on the course at the Plumas Pines Golf Resort in Blairsden provided the perfect setting for the Quincy Rotary Club’s 19th annual Clay Dyrr Memorial Golf Tournament held Saturday, May 4.

After the long wet winter it was obvious that the full field of 144 golfers were more then ready to enjoy a fun-filled day on the course — and they did exactly that!

This tournament continues to enjoy the reputation it’s earned of not only being competitive for the serious golfers, but fun for the higher handicappers as well.

The scramble format also features lots of contests and prizes on many of the holes, which makes for an entertaining and fun day for all levels of players.

First and second place Taking first place with an impressive 16-under par 55 was Team Beatty. That foursome, Donavon Beatty, Kyle Stone, Jerimie Barker and Dave Roach, each were awarded a $50 gift certificate and a round of golf for four redeemable at Plumas Pines, a prize valued at $1,640.

Just like the pros, a single stroke can make a difference and that is exactly what happened between first and the two teams right behind the winners.

Those second-place finishers each received a $50 gift certificate and round of golf at Plumas Pines for their efforts — a prize package worth $560.

With Mulligans (extra shots) available to purchase as part of Rotary’s effort to raise funds for their community service projects and youth programs, many of the teams participating posted scores that were well under par, but not all the teams.

Even with the extra shots, one team was destined to finish in last place posting the highest score on the day. Two couples, Marc and Tina Venable and Joe and Elaine Azevedo, said they had a terrific time and were proud of their final score, a 12 over par 83. So, to better hone their golfing skills and in keeping with the spirit of a fun-filled day, they received a team golf lesson from one of the course’s PGA golf instructors.

Men and women’s longest-drive winners were Erik Kelly and Sarah Richards, who once again nailed her drive to  win it for the second straight year. Each won a $25 gift certificate to the pro shop that was sponsored by Wild Hare Sign Co. of Quincy.

Beatty Construction Co. in Quincy sponsored the $25 gift certificates for the closest-to-the-hole contest, won this year by Henry Martin and Michele Violett.

The $25 gift certificates for the closest-to-the-rope contest sponsored by The Breaux Group were won by David Phillips and Cynthia Thomas (Worth noting: Last year Cynthia won the long drive contest as well).

Another highlight of the tournament is the drawing for $400 in cash given by Mike and Keri Taborski and Quincy Rotary. Rick Dinoso, Dan Qwardon, John Gay and Sean Abrams each won a crisp $100 bill.

Golfers collectively had 576 chances throughout the day to get an “ace” on one of the four par-three holes to win the hole-in-one prizes. Cynthia Thomas did it last year to win the Polaris ATV, but unfortunately, all the prizes went unclaimed this year.

Up for grabs was a fully equipped 2019 Polaris ATV offered by DuPont Power Tools and State Farm Insurance in Quincy and two separate $5,000 cash prizes courtesy of Plumas Bank, Edward Jones Investment, Flanigan-Leavitt Insurance and Les Schwab Tires in Quincy and a 50-inch television sponsored by the club.

Proceeds from the tournament benefit the Rotary Club’s community service projects and its youth programs and scholarships.

Next year’s tournament will be held Saturday, May 2, at Plumas Pines Golf Resort. Entry fee is $100, which includes golf, range balls, box lunch and a buffet immediately following play prior to the prize drawing and awards ceremony. This tournament has sold out with a full field of 144 players for the past several years so if you plan to play you are encouraged to get their registration form, which will go out next February, in as early as possible to save a spot.