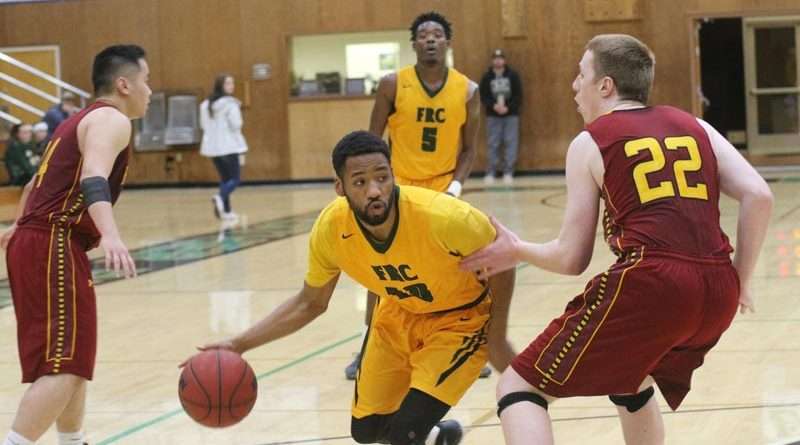 College basketball drives straight into conference play as the holidays fade in the rearview mirror. The Feather River College Eagles started off their season with a pair of away games facing cold, neighboring rivals in Siskiyous and Lassen followed by a pair of home games from warmer colleges in Redwoods and Butte.

At the end last week’s games, the men are 11-6 overall and 3-1 in league play. The FRC men average 78.6 points per game and hit 68.4 percent of their shots from the free throw line. Overall they are sinking 42.2 percent of the shots they take. They are landing 30.3 percent of their 3-point attempts as a team and average a pick up of 34.9 rebounds per game.

The lady Eagles are 11-7 overall and 2-2 in league play. The FRC ladies are averaging 73.5 points per game and are hitting 61.5 percent of their free throw shots. They are picking up an average of 43.9 rebounds each game and hit 28.3 percent of the 3-pointers they try as a team.

The lady Eagles beat the Redwood Corsairs 92-64 in Quincy on Jan. 17. They followed that with another action-packed home game with the Butte Roadrunners that ended in a final 65-63 for the visiting Roadrunners.

In the first conference game of the season Jan. 5, the Feather River College women beat the Eagle ladies from Siskiyous 87-77. “Our team is full of dynamic players,” said FRC head women’s basketball coach Brent Stephens. “We have a great group.” Coach has been working with the FRC Eagle women’s team for five seasons, four as head coach.

Facing Siskiyous, the FRC women took the lead in the first quarter 23-12. The Siskiyous team outscored FRC 25-19 in the second quarter, but not enough for the lead as the half ended 42-37. When the teams returned to the court, the northern Eagles still had fire in their bellies and repeated their 25-point quarter to the FRC 13 thus taking the lead 62-56. The FRC team burned up the court in the final quarter reclaiming the lead and the game by scoring 32 points as they held Siskiyous to 15.

Leading the scoring for FRC was Brenna Chavez with 24 points. She was followed by Ranika Guyton with 19, Holly Wood with 16 and Kynlee Penney with 12 points. Agmata and Muse added 20 to the scoreboard between them.

Chavez was really hitting the mark sinking five of seven 3-pointers. Guyton hit three of five while Agmata, Penney and Muse all sunk a pair each of 3-pointers. Again on the mark, Chavez hit seven out of eight free throw shots! Wow! Guyton hit four of four, 100 percent, as did Muse sinking two of two.

Chavez and Wood cleaned up most of the rebound action with 13 and 10, respectively, although every FRC Eagle picked up rebounds to contribute to the winning game.

“Holly Wood is one of our anchors and we are at our best when she is aggressive on both sides of the ball,” said coach Stephens. “Brenna Chavez may be the most complete guard in the state and has been extremely clutch in critical moments.”

Siskiyous players to watch out for when the ladies meet again for the last game of the season Wednesday, Feb. 20, are Natalie Karlsson, who scored 23 points; Lynden Harry with 17; and Ashley Cox with 16 points.

The Eagle men played the Redwood team on the FRC home court and beat the Corsairs 86-63 in front of a crowd of excited Quincy fans Jan. 17. Members of other Feather River College sport teams show up in large numbers to support their fellow college athletes and it inspired the crowd. One mystery man did an amazing spontaneous show of springy support for the Eagles during halftime against Redwoods. One can only hope the exhibition will be repeated.

The Eagle men followed up their Wednesday win by besting  the Butte Roadrunners on Jan. 19, again on the FRC home court in front of local fans, 63-60.

The Butte men were a single point ahead at the half 30-29, but the Eagles scored 4 points more than the Roadrunners to take the win by the end of the game.

“With the win over Butte, FRC grabs a tie for the conference league along with Shasta and Butte College,” said head men’s basketball coach Randy Rick. “Jordan Garner has been a major impact player dominating the paint and on the boards along with making consecutive crucial free throws down the stretch. Every player has contributed in some way each game to solidify the wins.”

The men had a different experience with the Siskiyous Eagles as they lost 75-55. The team has had a rough start this season with four players out for most of the early games according to coach Rick. Coach has been working with the FRC men for literally decades and has seen all kinds of season.

Leading Eagle scoring with 20 points was Jacoby Simon. Jakob Gramer scored 7 while Hogue and Garner added 8 points each. Jones, Johnson and Khalil also scored for the Eagles. Hogue fired away with 13 long 3-pointer attempts, in this game sinking two. Simon landed two out of five 3-pointers and Gramer hit two out of nine.

Jacoby scored on four of seven free throws, Hogue hit two of three as did Garner. Gramer and Khalil hit one of two.

Simon picked up 12 rebounds, Garner grabbed six while Jones, Johnson, Hogue and Velasquez all captured three each for the Eagles.

Siskiyous top scorer was Alex Velasquez with 23 points followed by Bishop Thomas with 12 and Deandre Churchill with 11. The FRC men will also face these Siskiyous birds again in the last game of the season Wednesday, Feb. 20, in Quincy.

The FRC men beat Lassen on Jan. 12, 87-79. Leading the Eagles was Jordan Garner with 21 points followed by Deandre Jones with 19 and Jacoby Simon with 16. Kevin Hogue hit 3-6 3-pointer shots to score 9 for FRC. Garner hit 5 of 8 free throws and led picking up nine rebounds. Patrick Arnold was right behind cleaning up eight and Simon gathered seven.

The Cougars come to Quincy for a rematch Saturday, Feb. 2, at 4 p.m. Fans may want to come out to help the Eagles win again.

The lady Eagles played a fast and furious game Jan. 12 with the Lassen Cougars losing by a final, but single point, in the last quarter, 69-68.

Lassen took the lead 21-16 in the first quarter. The Eagles rallied to outscore the Cougars, but not enough to take the lead before the half that ended 42-39.

With just 3 points between them the women battled it out on the court in the third quarter ending with the Lassen Cougars widening their lead by just a single point, 56-52. FRC outscored the Cougars for the second time in the game in the final quarter by 3 points, but they had needed 4 to tie and 5 to win. It must have been a fantastic game for the Lassen home team fans.

Chavez took 11 shots for 3-pointers and landed four. Guyton hit two out of three and Muse and Penney both hit two out of eight attempts. Agmata sunk a single 3-pointer. Muse had the best average at the free throw line sinking three of her four opportunities. Chavez and Guyton both hit one of two.

Lassen had a pair of dynamic scorers, Jocelyn Gandara with 25 points and Shayla Carrier with 24. The Eagles will get another crack at the Cougars on Saturday, Feb. 2, on the FRC home court starting at 5:30 p.m.