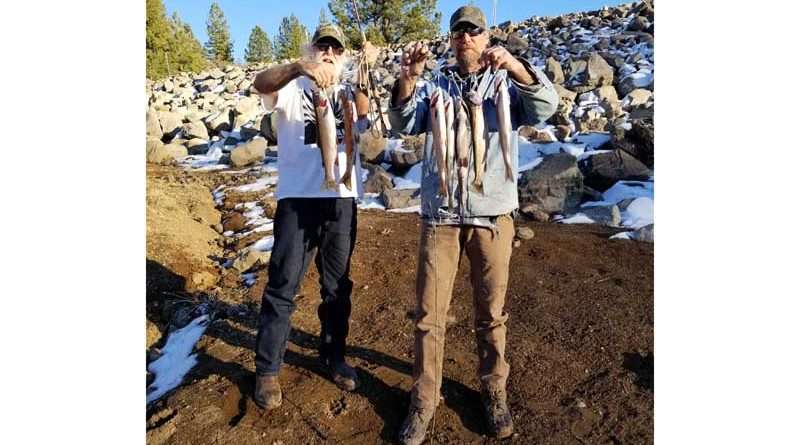 No fishing news had been reported from Bucks Lake at press time. Check in next week to see what’s biting.

Gary Blanchard is still having good luck fishing this winter. “Rob and I had a great day up at Frenchman Lake. The weather was super warm all week,” noted Blanchard. Of his new fishing pal, Blanchard said, “Met him a few weeks ago fishing with his brother whose name is also Gary. … He is a really knowledgeable fisherman and he usually gets his limit,” said Blanchard. Sounds like a good recommendation. “They smoke their fish and it is some of the best I have ever tried,” said Blanchard.

Fishing in a T-shirt most of the afternoon, Blanchard said, “Couldn’t ask for a warmer fishing day up at Frenchman in the middle of December.”

When asked to shed a little more light on last week’s 10-pounder caught at Frenchman, Blanchard said, “Some of the locals at the  H.O.A. [Home Owners Association] have private ponds stocked with huge trout, bigger than that, and some flooded down the streams into the lake. … Several other fishermen have sworn they have seen some monsters cruising after the schools of minnows at the dam,” said Blanchard. Heck, grab my tackle box boys, it’s time to go fishing at Frenchman dam!

Mountain Hardware’s “fishing guy” in Blairsden, Mark Tieslau, reports that Gold Lake is 95 percent frozen over, all except the outlet, but emphasized emphatically that the ice is not yet safe to walk on. It is Tieslau’s opinion that “there are still fish out there.” The road is still open, but it is icy on top.

Almanor Fishing Association brings us these details as of Dec. 17.

Still no significant weather in our forecast, we will see some snow on Tuesday night into Wednesday, NOAA is predicting less than an inch. An inch is not enough to help with water levels it is however an adequate amount to make travel treacherous,” said  John Crotty of AFA. “Highs will be in the 30s and lows in the teens, our roads will be slick!”

Parts of the lake are beginning to ice over as water temps continue to drop. “I fished the north end of the lake on Tuesday and found the surface temp in Goose Bay at 40.1 degrees,” said Crotty. There was no sign of any fish activity north of Rec No. 2.

“We were fly fishing and ended up finally finding fish South of Rocky Point in the coves. We managed to catch a half dozen smaller fish on olive and rust colored flies,” said Crotty. There is not much boat activity on the lake, most of the fishermen are targeting fish from shore and in smaller boats in the coves around Canyon Dam. The fish will continue to migrate to the south end of the lake as water temps drop.

“We still have not seen fish stacking up in the coves like we have in past years which is concerning for this time of year,” said Crotty. Fish are constantly moving in and out of the coves and you have to let them settle down after catching a few as they become skittish. The majority of the fish being caught are smaller 12- to 15-inch class and most are rainbows. “Hopefully this weather pattern turns and some bigger fish move in,” said Crotty. Floated crawlers and power bait are producing a few fish for bank fishermen.

Jeanne Graham from J & J Grizzly Store said, “Fish are being caught at Mallard and we are starting to ice, but the ice is not safe.” Graham says that there haven’t been many fishermen up, but those that have braved the cold, “are catching from bank using powerbait and worms,” said Graham, and “fly fishermen are catching on black Woolly Buggers.”

Tieslau from Blairsden’s  Mountain Hardware said that he is hearing, “Lake Davis is pretty much iced over except Mallard Cove and Camp Five,” but added, again with emphasis, “Lake Davis ice is not yet safe to walk on.”

One thought on “The fish are still out there”