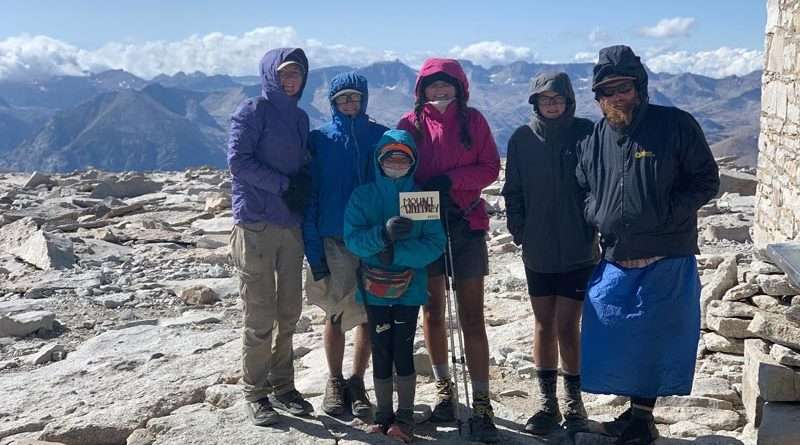 The Bennett family of six completed their epic journey, traveling 2,388 miles of the Pacific Crest Trail. The final leg ended Sept. 30 as the six Bennetts reached the top of Mount Whitney.

Plumas residents know weather is now becoming a factor at higher elevations in the Sierra. We can already see snow on Mount Hough after last weekend’s storm. For safety reasons, the Bennetts opted to not travel all the way to Kennedy Meadows, which technically would have completed the whole enchilada.

“We should have done another 65 miles to get to Kennedy Meadows,” said Mindi Bennett, “but the weather is so cold and storms are on their way … so we pulled off early to be safe.”

Plumas County met the family when they stopped in Quincy heading south in early September. They were filling in the miles they skipped heading north due to snow.

When the Bennetts reached the end of the trail in Canada on July 18 they headed back south to bridge the gap of the two sections they hopped over traveling north.

Initially the family skipped snowy conditions from Kennedy Meadows to Burney in California and a section from Ashland to Timberline Lodge, at the base of Mount Hood, in Oregon.

To complete their journey, they traveled south from the Canadian boarder to Timberline and hiked from there to Ashland.

The Bennetts then jumped to Burney to fill in the final gap south to Kennedy Meadows. Arriving on the top of Mount Whitney on Sept. 30 became the designated end of the 2019 trail for the Bennetts, a true journey of a lifetime. Every Bennett, except Muir the dog, made it from Mexico to Canada.

The family group, including the dog, started their journey in Campo, Mexico, on March 6 and made it to Kennedy Meadows on May 15. The snow was too much so they jumped the trail up to Burney and made the trek all the way to Ashland where snow was again a problem.

Muir was released from the rigors of the trail at Crater Lake after completing 1,700 miles of the PCT. Adam’s sister and nephew, Meagan and Wilohm Allen from Amboy, Washington, hiked 80 miles of the trail with the Bennetts and took Muir with them when they departed the trail.

The Bennetts will be re-entering “city life” in Washington state. “Yep! Real life will be hard!” said Mindi after life on the trail, but the family isn’t finished hiking all together, not by a long shot.

“We are planning to hike the Appalachian Trail next year and the Continental Divide Trail the year after that. Plenty to look forward to,” said Mindi.

The Bennetts used their PCT trail effort to raise awareness for a cause close to their hearts. “Our goal is to raise $2,653 for Lifting Hands International to help refugee families (a dollar for each mile of the PCT),” said Mindi. The link to support the Bennett family fundraiser connected with the hike is liftinghandsinternational.kindful.com/kidsoutwild/team-mindi-bennett.