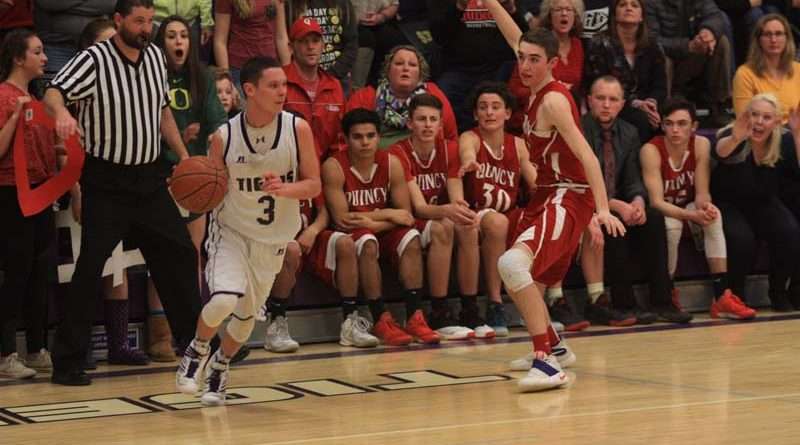 Even with fierce Trojan Drew Baumgartner on duty, Tiger Kodi Lowdermilk, No. 3, solicits cries of alarm from Trojans and their dedicated fans during the playoffs.
Sports
March 3, 2017March 3, 2017 Mari Erin Roth, Sports Editor

The Portola Tigers beat the Quincy Trojans 65-58 in the Northern Section basketball playoff match Feb. 22 on the Tigers’ home court.

In a competition that started off with an energy level equal to the final seconds of any tightly matched game, the basketball players of both teams really gave fans a show.

“Rowdy” is a good word to describe the crowd and each school’s cheerleading squads from the first moment the ball was tipped into play. Screams of encouragement were at such a decibel level those first moments that eardrums rang.

The first quarter ran tight ending with Quincy up by 1 at 16-15. High scorers appeared immediately with Trojan Crowe Herbertson-Deemer scoring 12 points in that period and 9 points from Tiger Kodi Lowdermilk.

The Portola and Quincy teams are extremely good rivals bringing it all to the court every time from beginning to end.

Portola took the lead by the half, which ended on a score of 33-25. Lowdermilk duplicated his first quarter putting another 9 points on the board along with scoring help from teammates Chandler Ross, Hunter Price, Dom Vukobradovich and Ricky Johnston. Quincy added 9 points in the second quarter to the Tigers’ 18.

The third quarter was dramatic and exciting and contained everything great about high school basketball.

The Trojans caught up and took the lead, further exciting the crowd, bringing the score to 34-33. Back and forth the teams rallied, matching points and dramatic plays. Quincy’s Herbertson has a knack for 3-pointers when it really counts and he contributed making the score 37-37.

Simon McQuarrie, however, was full of razzle-dazzle and added three 3-pointers in the third quarter bringing fans to their feet. Drew Baumgartner also put in a 3-pointer that period. The Trojans had rallied with 16 points to the Tigers’ 13, but it wasn’t enough to take back the lead.

By the end of the quarter the Tigers had the lead back in their tightly fisted paws. Lowdermilk put another 7 points on the scoreboard making his total for the game 26 points up to that point. Eric Jacobson, Antonio Maddalena and Johnston also scored.

The Trojans were still in the game, but the Tigers led 46-41 going into the fourth quarter.

The Trojans kept on truckin’ but the struggle seemed to be turning in the Tigers’ favor. Both teams continued to amaze the crowd with spectacular plays.

Lowdermilk really shined. His hands were like glue and it seemed that any ball that passed him came under his control. Given the slightest opportunity he’d steal the ball and before a second would pass he’d be down at the Portola goal racking up Tiger points with his simple but perfect layup.

The game ended with the Tigers winning 65-58 in one of the best games of the season.

Lowdermilk earned 12 points in the last quarter for the Tigers bringing his game total to a whopping 38 points. He didn’t do it alone. The Tigers were a well-oiled team, but 38 points out of 65 is 38 points.

Antonio Maddalena added 8 and was all over the court, making scoring extremely difficult for the Trojans, as did Vukobradovich. Chandler Ross added 6 points and Johnston made 5. Jacobson made his presence known persistently challenging the Trojans. The Tigers all played tough defense, which opened up the channels for Lowdermilk to slide on by.

Herbertson-Deemer was high scorer for the Trojans with 25, nearly half of the 58 Quincy points. Baumgarten added 10 and McQuarrie totaled 9 from his big third quarter. Cameron Dingel made 8.

Both teams, all the coaches, and the many dedicated parents and fans shared some very special and energetic months. The season was filled with enthusiastic support for active youth entertainment away from technology for the 2017 high school basketball season.

Portola went on to challenge Williams on Feb. 24 to try and knock the Yellowjackets out of the Northern Section competition heading for the state championships.