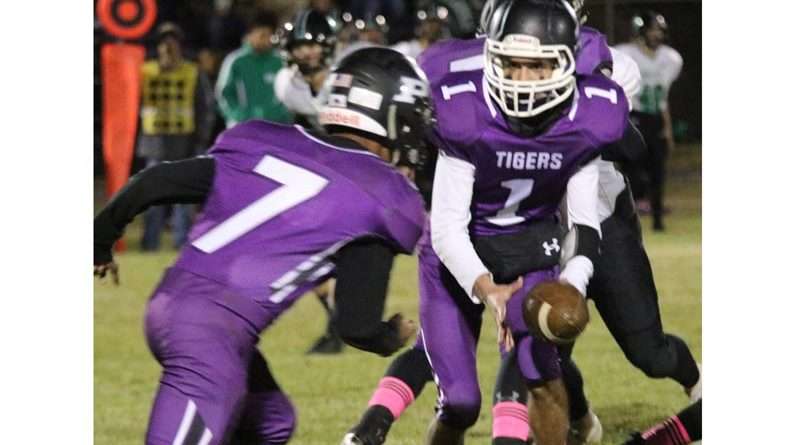 Tiger quarterback Dylan Gonzalves hands off to Diogo Juarez as the Tigers battle with the Biggs Wolverines on Oct. 25 in Portola. Photo by Mari Erin Roth

Portola football traveled to Etna to beat the Lions by a score of 19-12 on Nov. 1.

“Our bus broke down 20 miles out of Etna on the way there,” said PHS head football coach Steve Heskett. It is a long drive from Portola to Etna, breaking down along the way, just an extra-added bonus. But all was not lost. “The people from Etna helped us out big time. They sent a bus to pick up our team and a van to pick up our coaches. Also had somebody from their community make a drive into town to get the proper parts and fixed our bus so we could get on the road after the game was over!”

Once the teams made it on the field and the game began, neither team scored in the first quarter. The Tigers scored a TD and extra point in the second quarter and Etna scored a TD, 7-6.

In the second half, Portola scored a touchdown. In the fourth quarter both teams scored a TD for the final score of 19-12. PHS ends the league 5-3 and an overall record of 7-3. They have a bye this week and then the Tigers start playoff games Friday, Nov. 15. “Our first game may be at home,” said a grateful Heskett after the 522-mile round-trip to Etna.