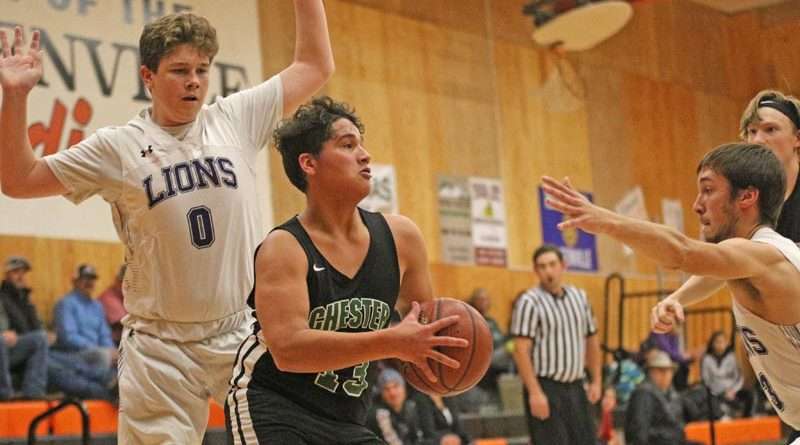 Portola girls beat the Hamilton Braves in the semifinals of the McLaughlin Memorial Tourney in Biggs by a score of 51-35. “Both Mya Wilson and Margaret Canseco scored 14 points and Emily Sheridan had 9,” said PHS head girls basketball coach Chip Wilson. “The Tigers were down 8 in the fourth quarter, but rallied and outscored the Braves 19 to 2 to win the game.”

After their initial victory in the tournament, the Tigers went on to beat East Nicolaus by a score of 49-25. The PHS girls moved on to the championship round to face the Etna Lions. It was a close game and a fierce battle for the first-place trophy. The Lions claimed “King of the Court” winning 56-50.

Tip Off in Quincy

Portola and Quincy boys competed closer to home at the Tip off Tournament at Quincy High School. The McQueen Lancers took the first-place trophy with them when they headed back to Reno. The Lancers were victorious over the PHS Tigers on Dec. 6 by score of 64-25.

The Lancers were sharp shooters, but when they missed, rebounds were the name of the game. Avila picked up six rebounds and Folchi picked up five. Curren collected a total of four. Gonsalvez and Ruiz gathered three rebounds each. Callahan, Massey, Bowling and James Sampson each picked up two rebounds.

The McQueen team had to face the Trojans after the win over the Tigers. The Lancers won the final tournament championship game with QHS, 74-42.

The last game of the Tip Off was a rivalry match between Quincy and the Portola Tigers. The Trojans won the game 66-54. QHS led in the first period 22-10. The Tigers rallied to outscore the Trojans before the half but not enough to take the lead, 31-21 Quincy.

The third quarter was fast-paced as the Tigers again outscored the Trojans, but remained trailing 58-41. The Quincy boys finished big, scoring 18 points to the Portola 13 for the final outcome of 66-54 for Quincy.

The rivalry game between the Chester Volcano girls and Greenville ended in a victory for the GHS Indians 46-22. Bustamante scored 23 points, Goodson 13, Banchio and Fieldson added 4 points and senior Rosemary Balbiani added 2 for Greenville.

The challenge the GHS girls received from the Downieville Warriors ended in a victory of 42-17 for the Indians. Bustamante scored 16 points, Fieldson 14, Goodson and Banchio added 4 points, Heard and Tyler scored 2.

Greenville scoring in the final championship game that Redding won 68-28 came from Bustamante with 14 points, Banchio managed 5, Tyler 4 and Goodson added 3. “But it’s early in the season, and we have some work to do. We will be ready for league! Second place isn’t too shabby!” said coach Bustamante.