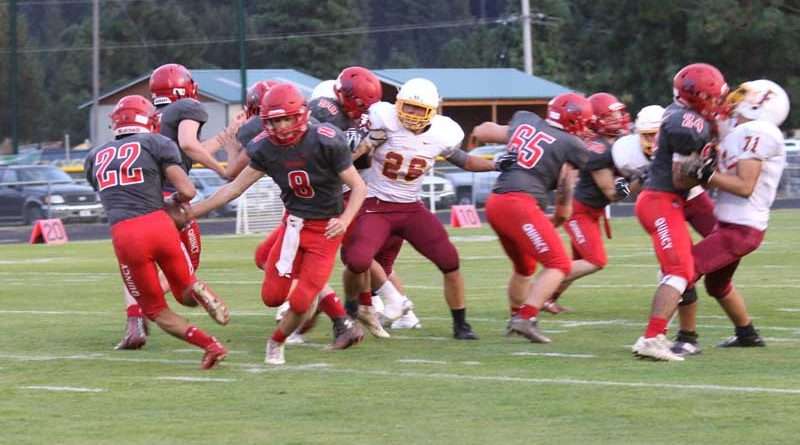 Trojans quarterback Conner Caiazzo, no. 8, hands the ball off to Kianoa Hall, no. 22, for one of three touchdowns by Hall. Photos by Mari Erin Roth
Sports
October 8, 2017October 6, 2017 Mari Erin Roth, Sports Editor

At a thrilling homecoming for Quincy High students and fans, the Trojans won their game Sept. 29 at Feather River College against the Foresthill Wildfires.

With the queen and princess crowned before the game, the Trojans were primed and ready for an exciting homecoming battle on the spacious FRC field.

Quarterback Caiazzo had a terrific game, passing 157 yards and carrying the ball 17 times for an additional 115 yards. Caiazzo’s grand total for the night was 272 big Trojan yards.

Lead receiver was Williams with 123 yards. Seniors Christian Miranda and Hall each intercepted the Wildfires, carrying the ball 8 and 31 yards respectively.

The Trojans play the Volcanoes in Chester at 7:30 p.m. on Friday, Oct. 6, for the Volcano Homecoming game.

The following week, Friday, Oct. 13, the Trojans and the Portola Tigers will both hope to be the lucky ones as they match up in a rivalry game in Quincy starting at 7:30 p.m. at the FRC field.