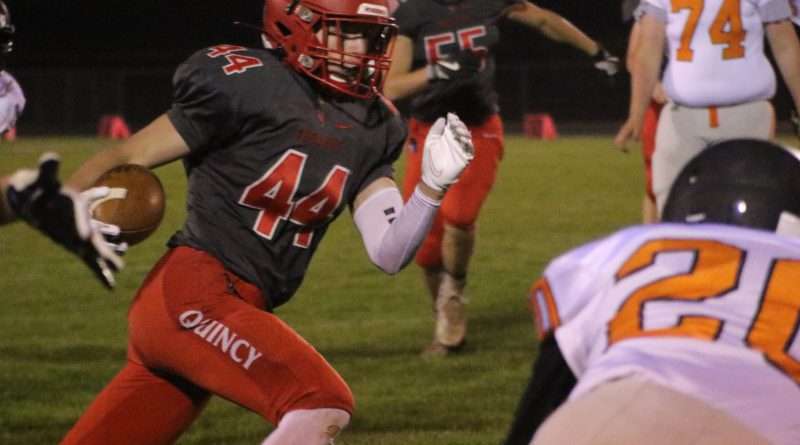 Weather was ideal April 2 as the Quincy Trojans tackled the Greenville Indians at Feather River College in front of a smattering of families as games are not open to the public.

“Under the circumstances, Greenville being a small Division 6 team and Quincy being a good-sized Division 5 team, I think we played a solid, gritty game,” said GHS coach Dave Keller. “These young men have every reason to be proud of their effort and composure. I think these spring games against these larger opponents will prepare Greenville for the fall 2021 season.”

Touchdowns for Quincy High School were many and scored by a variety of Trojans. Garrison Dyrr threw a pass to Hayden Brawley who then carried the ball into the end zone to score. Dyrr made three rushing TDs. Daniel Mercer had one rushing touchdown as did Aidan Powers and Eli Allred. Powers also recovered a fumble and scored a TD. There are three seniors on the Quincy team. Harvey Merino, Nick Caiazzo and Jonathan Swan. Caiazzo and Swan are participating in soccer simultaneously with football.

“We have a really young squad, but I could not be more proud of their patience and perseverance throughout this whole situation,” said Quincy head football coach Daniel Waltermire. “We are fortunate to even be out on the field right now and I appreciate that the Greenville and Loyalton programs have rallied to get these kids some football this year. We still have a few more games this season but I’m excited for the next few years of Trojan Football.”

The Trojan season continues Friday, April 9, in Quincy facing the Loyalton Grizzlies. Friday, April 16, the Trojans have a rematch with the so-far-undefeated Portola Tigers to battle for the rights to take home the traditional rivalry trophy.

The Tigers traveled to Los Molinos April 2 and beat the Bulldogs 21-8. “Portola is a machine,” said GHS head football coach Dave Keller. The final game for the Trojans will be in Greenville with the Indians, Friday, April 23.

Greenville heads to Loyalton for a Saturday afternoon game with the Grizzlies April 17 before hosting Quincy to end the short season.