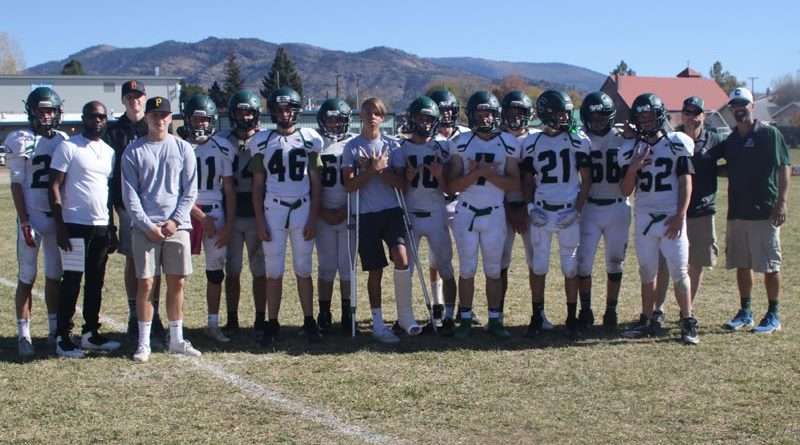 The undefeated Volcanoes in Loyalton on Oct. 26 at noon after marking their ninth win in a row. Photo by Mari Erin Roth

The Volcanoes came to Loyalton on Oct. 26 with an 8-0 record ready to make it 9-0 and they succeeded. The CHS boys won over the Grizzlies by a score of 64-0.

“We are really excited to see how we are reaching two of our three season goals, becoming a family and becoming a team,” said Chester High School head football coach T.J. Ragan. “Our third goal, we will have to wait until the end of our season to see if we reach.”

After the Chester team burned through Sierra Valley, there was just one team left in the league with a chance to stop the scalding flow of the hot Volcanoes … Greenville. The neighboring rivals met in Chester on Nov. 1, for the final game of the regular season before playoffs.

The CHS Volcano fans were not disappointed as they piled into the stands Nov. 1 for the last home game of league play for their undefeated CHS football team. “These boys still amaze me; seeing these kids grow from freshman football players to senior players is so exciting to watch,” said Suzann Ramoz, mother of senior CHS football player Trenton Longacre. “The fact that they are kicking off for the playoffs this Friday is so exciting! All the boys deserve another Section Championship win! They definitely have put their hearts into this football season.”

The Chester boys dominated the field in the rivalry game as the Greenville Indians football team came to challenge. Dozens of GHS fans braved the cold to cheer on their team and they were rewarded with steady effort from their team.

With just two minutes left in the game, it appeared the GHS determination was to net a goal. The Indians were less than 10 yards from a touchdown and had four downs to accomplish the task. Anticipation peaked and hopes were high. The Indians had literally stopped the Vols in their tracks, the CHS machine came to a grinding halt on the scoreboard after the half, and now, Greenville threatened to score. But no, after four tries the fourth down turnover allowed the Volcanoes to run out the clock for the final seconds of the game, and they did.

Chester won the game 50-0. It was a mighty victory for the Volcanoes as it marked the end of regular league play and a completely undefeated season. The Greenville Indians could be proud of the undying spirit of their team to the end and finding the brakes to put a hefty stop on the CHS football team.

Senior Michael Bereznak and junior quarterback Kameron Stelzriede scored the first two touchdowns for CHS. Both extra point attempts by Chester were unsuccessful. Senior Callum Kremer scored a touchdown and again no extra points were earned with 4:51 remaining in the first quarter.

Head football coach T.J. Ragan pelted his team with positive comments and encouragement from the sidelines.

CHS Offensive Coach Scott Oswald and CHS Defensive Coach Oliver Pollard kept their eyes on the play and continued to provide insight for the Volcanoes players on the field.

CHS’ Bereznak streaked down the field after receiving a Stelzriede pass of 50 yards or more and took it all the way to the end zone. Kremer rushed across the goal to complete the first conversion of the evening leaving the score 20-0. With 13 seconds remaining in the first quarter, Kremer scored a TD. Extra points evaded the Vols but the score was a tough 26-0 before the second quarter.

As play resumed, Stelzriede scored another touchdown bringing the second quarter score to 32-0.

From the sidelines play did look rough, however, good sportsmanship was on display as team members offered and helped opposing team members up from the field after collisions.

“We’ve seen a lot of laundry on the field,” said the game announcer over the PA system, and indeed we had. Flags flew all over the field, from all directions, during play after play. A record number of personal fouls were being flagged. At this point in the game, referee Tony Campa took a moment to give the boys a little talk about personal fouls.

After the chat, play resumed. Kremer successfully crossed the CHS goal line for a 2-point conversion, the second of the night behind five touchdowns. The score was 34-0 with 2:47 remaining in the second half.

CHS senior Hunter Snyder intercepted a Greenville pass near the CHS 35-yard line and ran 65 yards to score for the Volcanoes. CHS quarterback Stelzriede ran a quarterback keep, untouched, straight up the middle to score the 2-point conversion, 42-0.

Hunter scored a touchdown and Stelzriede repeated his method for the 2-point conversion and the score was 50-0 before the half.

Greenville’s quarterback Andrew Putnam was injured in the mix of rough play and sophomore Wade Neer came in to fill the shoes. The combination of senior Harlan Savala and Neer made some headway. The Indians had to get creative to fill in the gaps and the team combinations and flexibility did some good. Kyle Hitson, Garrett Miille, Westin Lawson and Savala pulled tricks out of their hats that got the Indians to the goal line with minutes to go in the final quarter. The GHS boys worked tightly as a team and held the Volcanoes to zero points the entire second half of the game.

The Volcano boys will host Hayfork Timberjacks for the first round of playoffs starting at 6 p.m. this Friday, Nov. 8, in Chester. They finished the league 7-0 and an overall 10-0 record, undefeated.

They are ranked number one of the 16 teams in Division 6 as they head into Northern Section playoffs. Behind Chester at 7-0 in the league and 8-1 overall are the Redding Christian Lions. Tulelake and Big Valley are tied next with 5-2 records.

The Greenville Indians also head to Northern Section playoffs, but they will have to travel for game one.