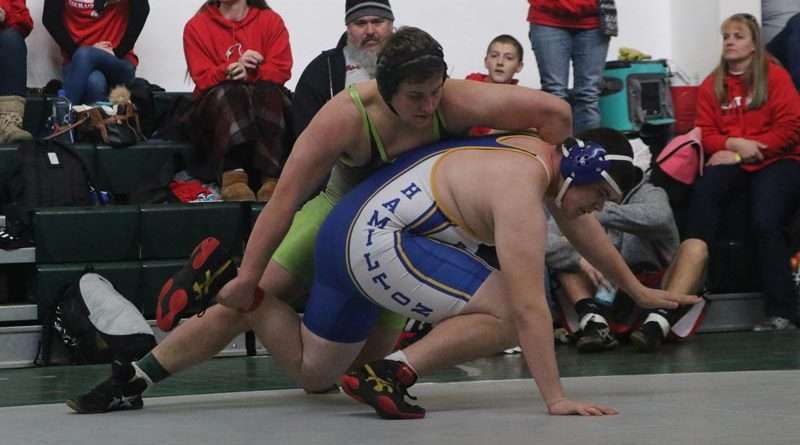 “Wrestling is a sport like no other,” said Jessica Coelho. Her son, Lane Coelho, is on the Quincy High School wrestling team. “Wrestling builds independent character, helps to find your level of inner strength and teaches responsibility.”

Depending on the level of personal involvement and dedication, all high school sports have the ability to offer huge transformational changes to the students who choose to participate. The teenage years are a vortex of change anyway, physically, mentally and emotionally, as any parent can attest.

Whether you win or lose, there is always something to learn. Wrestling is about stamina, mental and physical, “and for up to six minutes you can guarantee that these will be tested to the fullest,” said Coelho.

As a parent, Jessica noticed changes in her son Lane. “There is a special quiet confidence that follows a wrestler. Wrestling turns boys to men, coaches to sensitive caring humans and mothers into nervous wrecks!” said Jessica.

QHS head wrestling coach Cody Clayton has said many times, “Wrestling is the toughest sports known to humankind.” Clayton comes by his opinion honestly. He is an outdoor sport enthusiast of, what some might call, the extreme variety. Telemark skiing and white water kayaking top his local activities, but Clayton says that it was wrestling that changed his life.

As a youngster growing up in a tough situation, Clayton recalls how the sport of wrestling is what shaped and molded him into the person he is today. Clayton has been pumping energy into the Quincy wrestling program for five years. “It’s my goal to have a sustainable program that will last,” said Clayton.

“Both Chester and Quincy High Schools have built programs that send multiple athletes to compete at the state championships,” said Clayton, “for schools our size, that’s unheard of.” Clayton commends the work CHS head wrestling Coach Tom Rogers has put in to develop “a successful and very sustainable wrestling program in Chester.”

Jan Jensen is part of that QHS sustainability as she supports her wrestling son Zach, and the whole team, by being what she calls, “the mom away from mom.”

“The camaraderie and closeness of the team is nothing I’ve seen in any other sport,” said Jensen, “The boys practice together for hours, spend just about every weekend away from home together.”

The wrestlers have grown to be a very close-knit group. The shared philosophy is that everyone looks out for and supports each other. “There is a dedication to wrestling that is unlike any other sport.” said Jensen.

Clayton is convinced, “It’s the toughest sports around.” Coach says he spots weaknesses and, “I work them.” Clayton says he has the whole season to help the boys work on their soft spots to ready them for competitions. “During matches I have to do the tough things,” said Clayton. “I have to make them work on their weaknesses not just their strengths.”

Parker Carey has been involved in wrestling in Quincy for four years. His parents, Amy and Frank, really like what wrestling has done for their son. Parents spend a lifetime trying to teach their children to do things that are good for them.

“Wrestling makes him very health conscious,” said Amy Carey, “and it’s doesn’t have to come from me.” Mama Carey thinks the wrestling program is “phenomenal.” She gives much of the credit to coach Clayton, “he is just a good person,” and Clayton gives the credit to the sport.

The story of Clayton’s beginnings in wrestling and how he came to restart the program at QHS is currently airing locally on KQNY 91.9 FM in the Hear Today, Here Tomorrow Show playing this Friday, March 2, at 1 p.m.; then Sunday at 11 a.m.; Tuesday, March 6, at 7 p.m.; and also online at mixcloud.com.